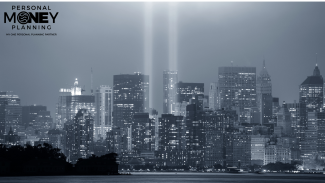 It is hard to believe that it has been 20 years. Time really does fly. But, as you have probably discovered, while no one forgets 9-11, before this past week, we had stopped thinking about it. While I did not personally know anyone who died that day, I have read many of their stories. And as the floors of the Twin Towers were filled with financial firms, I have no doubt that I had phone conversations with some who died that day.

As this is the day after the anniversary of the attack, allow me to revive a memory from September 12th, 2001. If you recall, families of the missing were posting pictures of their loved ones around the disaster area. Several television stations were broadcasting quick 30-second interviews to help in the location efforts. I remember one young lady, probably in her 20s, showing a picture of her fiancé.

By the time of the interview, she had been up over 36 hours, walking to the various hospitals and triage centers searching for him. Thirty-six hours. On her feet. Walking marathon distances. Pleading into the camera, she held her fiancé’s picture up to the lens, hoping someone would recognize him. She described how he worked on one of the top floors on one of the towers. Well above the impact points.

It was her eyes that I remember. At once, they melded feelings of desperation, fading hope, and oncoming despair. She had yet to allow the possibility—the likelihood—that her love did not survive the attacks.

No one said anything back to her during the interview; perhaps they just didn’t know what to do, or they had the wisdom to realize that nothing could be done.  As the camera panned off her, and on to the next person, I started to lose it. Completely lose it. It would not be the last time. In her vulnerability, I sensed what the entire nation was going through. At that time, the only thing that I wanted to do was to give this stranger a hug and just cry with her. The crying I could do. We all needed hugs that week.

In the ensuing years, we have exacted some revenge, tightened our borders a bit, and clamped down at airports a lot. Some of this was justified, some is still open to debate, and some was the understandable reaction of a country dealing with the loss of its innocence.

So perhaps it is fitting to take some time today to reflect on the past and consider our future. In the days and months after 9-11 we were a country joined in spirit and determination. Though battered and bloodied, we stood truly united. Created from the dust of the Towers that had symbolized our strength and the ashes of innocents that were our best, the clouds rising that day covered us, much like it blanketed the survivors stumbling through the streets of Manhattan. It touched us all. It made us one.

I pray that the memory of those moments gives We The People renewed strength and determination. Let’s eliminate our own foolish self-importance and jealousies that result in petty squabbles, vain labors, and an unwillingness to sacrifice. Instead, let’s remember that unity is possible as we join together, even when we disagree, to make the future of our country and its people worthy of the sacrifices so many have made in the preservation of freedom.