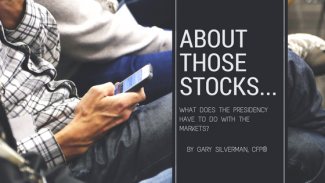 One thing we can be certain about: No matter what you think about President Trump, his first year in office has been great for the stock market. At least that’s what his supporters will tell you. But their memory is rather short. After all, the first year under the Obama administration was demonstrably better from a stock standpoint. I don’t remember hearing “Thanks, Obama” back then. Yet Obama was the one in office when the market started recovering after the Great Financial Crisis. The momentum continued once Obama left office.

Trump detractors may have been giddy to see your 401(k) drop just hours before his recent State of the Union when the Dow dropped 363 points. It was one of the worst days for the Dow since Trump was elected in 2016. Then there was that massive drop on February 5. That you can squarely put on Trump since we are now in his second year.

But before Obama fans begin to accuse me of Trump bashing, may I remind you there were similar drops well into Obama’s second term.

It seems that no matter who is in office, some folks, encouraged by the upward swing in the markets, just know that their guy was the reason for celebration. If you don’t look closely, it certainly looks like cause and effect. Or does it? No new Trump policies that looked unfriendly to business came across the day of the State of the Union. And yet, the market dropped anyway. Business growth remained strong and the markets dropped 1000 points. What the heck is going on?

Well, that’s what the market does, right? “Thanks, Obama” is as easy to justify as “Thanks, Trump” depending on how you decide to look at it.

The market fluctuations may have a bit to do with the party’s policies, but that doesn’t mean the President is controlling what is happening in the markets, whether he takes credit for it or not. Making such generalizations can lead us to make short-term decisions with our money, which, if your money is needed down the road, is never a good idea.