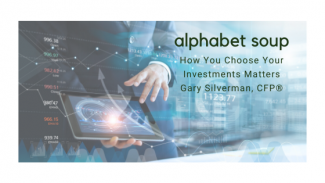 Alphabet Soup: How you choose your Investments Matters

By Gary Silverman, CFP®
The other day I was reading Pensions & Investments magazine. Yes, it can be as boring as it sounds, but this is my world. Most of the time the information is more of interest only to financial professionals, but that day an article caught my eye that I thought my readers might find interesting.
Now, the subject matter was one I was familiar with as similar studies have been done concerning marketing. The subject? People tend to pick from the first part of a list, ignoring the latter choices.
You probably already knew this. For years old folks have seen Yellow Pages ads in most any category starting with A, AA, AAA, Acme, A-plus, and pretty much any combination of letters that would get the company in question toward the top of the list. That’s because few people read much past the first half-dozen or so choices before making a call.
The article by Margarida Correia from the The Financial Review showed that the same thing happens when people are choosing investments. This little psychological quirk is called “alphabeticity bias” and, like most biases, is mostly unnoticed by the people affected. Yet one of the people interviewed in the article described the effect as “huge”.
This problem tends to affect most when it comes to choosing investments in their 401(k) plan. There, usually the investments are broken up by asset type and then alphabetized. If multiple providers are mixed in, you’d have American Capital and American Century funds coming first and poor old Vanguard toward the bottom. (Not that Vanguard is exactly suffering for assets.)
Most of the rest of the article has various folks arguing about how (or whether) to fix it. Some proposed ordering investment lists by expense ratio, others suggested that low risk funds come first and riskier toward the end.
The problem is that just because you have a low risk, low expense fund doesn’t mean that’s best for you and your situation. Then again, either is the first part of the alphabet an indication that a fund will meet your needs.
In the end, Vanguard, that alphabet-challenged but “huge” investment complex thinks that while the study is interesting, it doesn’t really matter that much. The reason? Most people just pick a Target-date fund.
Gary Silverman, CFP® is the founder of Personal Money Planning, LLC, a Wichita Falls retirement planning and investment management firm and author of Real World Investing.