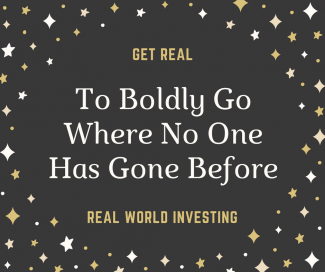 To Boldly Go... (An Introduction to Risk)

Risk taking is invigorating to those who plunge down white water rapids, soar through the skies strapped to a hang glider, or descend into the earth while spelunking. For most, those feats bring not exhilaration, but fear. The same can be said when it comes to investing. Ask most investors about risk and you'll hear that it's something they want to avoid.

But what is risk? Technically, risk is simply the variation you see compared to the expected value. Another word we might use is volatility.

The key is to understand what risks you are taking. That way you won’t back yourself off a cliff trying to get away from a lesser danger.

There are no risk-free investments

To understand investment risk, investors must accept certain fundamental truths of investing. First, just like cash in a mattress, there is no such thing as a risk-free investment. I don’t blame you for thinking there is, as folks in the investing world (me included) often use the term “risk-free” to describe things like bank savings accounts, CDs, and even treasury bills. But in that case what we mean is that there is little or no volatility or risk to principal. There are still risks that we’ll learn about later.

Second, investors seeking greater investment rewards must be willing to accept greater risk. But what if you don’t want to take that much risk?

As you might expect, by lowering the risk of a portfolio, we generally also lower the anticipated long-term returns. This can be a good trade-off. Why? Because in time of market turmoil, investors will do stupid things if their portfolios drop too far for too long.

In both the tech-bubble burst at the turn of the century and the credit crisis that followed, markets crashed. In both instances investors could stand only so much and many sold after the massive declines. If they had been able to hold on, they would have seen their portfolios eventually recover and grow. But fear overrode sense and their temporary losses became permanent.

This is not anecdotal.  I looked at the Vanguard S&P 500 Index fund (investor class). This is an all-stock fund that follows the venerable S&P 500 stock index. It’s about as plain-vanilla a stock mutual fund as you can get. Over the 15 years ending in June 2016, the fund has averaged a total return of 5.63%. This encompassed two very bad down markets and two very good up markets.

So how did the Investor Return stack up to the fund’s actual return of 5.63%? Not so well: Investor Return over the same period was a pitiful 3.51%. To give you an idea what a difference this can make, consider what a $10,000 investment can make in 15 years. At 5.63% that would have grown to just over $22,700 based on the fund’s return. But at the investor return of 3.51% the account would have been just shy of $16,800. Since I imagine a lot of the fund’s investors did nothing—just staying in and riding the fund up and down—it means that those who attempted to get in an out on their predictions of the future did even more dismally than these numbers show.

By limiting a portfolio’s risk in line with your ability to tolerate it, we can reduce or eliminate the chance that you will “freak” and sell out during a market bottom. Preventing that possibility is well worth a slight reduction in expected returns.

Risk Varies by Length of Time

Third, the risks an investor faces can vary depending on how long an investor has to achieve her or his investment goals.

Which of them are right?

So, if you put your money in the market next January 1 and pull it out 12 months later on December 31, you have a 1 in 5 chance that you will experience one of those 20%+ declines. If, on the other hand, you put your money in and leave it there for 20 years, it’s all but guaranteed you will go through at least one and more likely several of those falling moments. That’s what the professor is talking about, the longer you are in, the more likely you will have a nasty event occur.

But the investment professional is correct as well. That’s because if you put your money in the market for one year, you have a 1 in 5 chance of being in one of those 20% drops and not having time to recover from it. You might endure a lesser drop, but enough of one that you’re still at a loss by the end of the year. In fact, over the last 100 years, you would have had about a 1 in 3 chance of ending the year with less money than you started with.

If, on the other hand, you put your money in and left it there for 20 years, there has not been a time in the last 100 years that you would have lost money.

Ready to learn REAL Investing tips based on your life? Sign up for the  Real World Investing course today!