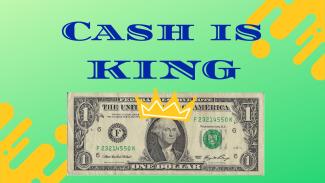 Cash is an Expensive King

You’ve no doubt heard the saying, “Cash is King.” Well, our friends at the brokerage firm Charles Schwab got in a bit of trouble with the Security and Exchange Commission (SEC) by taking the crown off their clients’ heads and putting it on their own.

A new kid on the block showed up around a decade ago: Robo-Advisors. The idea was that computers are better than humans at everything, so why use a human to help you invest? If you want help, skip the human, and let a computer manage your investments for you. A major selling point is that it’s cheaper--cutting out those humans can save a lot of money.

Robo-Advisors started popping up everywhere. Regular brokerages saw this as a threat, and many started their own Robo-Advisor offerings. Then along came Schwab.

Schwab did one better: They created a Robo-Advisor and made it free. Consumers, thinking free was better than cheap, started shifting their business to Schwab. Was the demise of many of the early Robo-Advisors due to Schwab’s entry into the business? The timing makes a compelling argument.

Does anyone reading this think Schwab is actually doing this for free? I didn’t think so. Schwab came up with a series of portfolios from aggressive to conservative with differing percentages investing in stocks, bonds, cash, etc. All of them contained a certain amount of cash, as you’d expect.

But each investment model required more cash than even their investment teams thought was prudent. We can only conjecture, but the cash went into a bank, and that bank was owned by Schwab. Banks make money off the cash you give them, and thus Schwab was making money, not from charging for the investment advice, but from the extra cash they received from their Robo-clients to invest in the Schwab bank.

The SEC’s findings determined that Schwab advertising implied “…investors would end up with more money as a result of not being charged an advisory fee—even though internal models showed that the cash allocations would reduce returns by a similar amount when other assets such as equities outperform cash.” The right hand giveth, the left hand taketh away.

If they had just clearly told their investors of this money-making compromise, I doubt anything would have come of it. But by implying their Robo-advice was cheaper, they got the SECs ire. Enough ire to end up getting fined $187 million, which probably wiped out all the profits made with their Robo offering.

Thing is, the SEC might have taken away their profit, but they can’t bring back their competition.