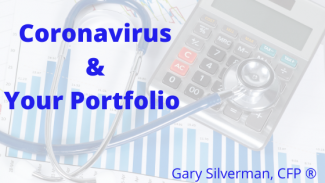 Coronavirus and Your Portfolio: Part 1

Let’s talk. It seems that people are a bit concerned with the coronavirus emanating out of China. I’m writing this a while before you read it, so the virus might have been contained and in the process of being eradicated. Or you are currently living in a real-life a version of the movie, Pandemic. My guess is that something in-between is going on. But since I’m more of a money guy than an authority on infectious diseases, so let’s talk about the coronavirus and your investments.

China isn’t going to have a good time of it. Locking up entire cities in the middle of their biggest travel time of the year is a bit disrupting. Hotel chains, casinos, airlines, Disney, Kentucky Fried Chicken (KFC)…all of these and hundreds of other companies will see significant downturns.

If people can’t get to work, they can’t manufacture things. And the things that those things go into can’t be built. Some of these delays are temporary. Car sales may be down, but once people can get out of their homes and to a dealership that can be made up. Missed flights cannot.

On top of all this, the Chinese economy was already growing at the slowest rate in decades. Then again, they are still growing faster than anyone else, so it’s more “not as good” rather than “bad.” But if you are an investor you pay for future earnings, not past ones, and the future is definitely cloudier.

Realize that this isn’t just a Chinese story. As I mentioned, YUM Brands (KFC), Disney, US Airlines, Starbucks and a slew of others are who sell into the China market are being affected. This includes just about every commodity there is.

But equally so are those that rely on China manufacturing. And that’s, well, just about everyone.

In this age of globalization, a hiccup anywhere sends vibrations throughout the entire world’s economy. And when that hiccup is China, it’s like someone jumping on a waterbed. Those with the closest links, which includes almost every Asian economy, will experience the roughest waves.

What to make of all this and what to do about it…we’ll look at that next week.