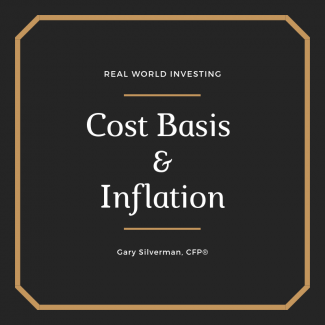 Recently there have been proposals to index the cost basis of securities when it comes to taxing capital gains. That got me thinking about the whole capital gains tax mess and what I think we should do about it (warning: you’re not gonna like my ideas). But first, I think I need to explain capital gains.

When you buy something, the amount you paid for the item, including the expenses in obtaining it, is called your cost basis. This cost basis is compared to how much you sell the item for (less what it costs you to sell it) to arrive at your capital gain. If you sell it for less than what you bought it for, that is called a capital loss.

Currently most forms of capital gains are tax-advantaged in three ways. First, they are taxed at a lower percent than your ordinary income. Second, no taxes are paid on the growth until you actually sell the item (this is particularly handy since until you sell it you might not have the money to pay the gains). Lastly, when you die, in most cases your cost basis is reset to the current value of the item.

Here’s how that last part works: Let’s assume you bought Apple Computer many years ago for $2000. It’s now worth $3000. Normally if you sold it you’d owe taxes on the $1000 gain. Well, if you died there would be a step-up in basis making your cost look like it’s $3000. If heirs sold it before it went up any more, there would be no gain and therefore no taxes.

A proposal that is currently running around Washington (and that has come up before) is to index your cost basis to inflation. Going back to my Apple example: let’s say that from the time you bought the stock until now there had been a total of 15% of inflation. That means that the $2000 you bought it for would be equivalent to $2300 today. If you paid taxes on the whole gain you would effectively be paying taxes on inflation and the “real” gain (in investing when we start using the word “real” we’re usually talking about inflation-adjusted numbers).

I have no problem with the cost-basis indexing, but one of the reasons often touted as why we have lower tax rates on capital gains is the inflation issue. Seems to me folks want lower taxes because of inflation twice. I’d say that one or the other makes a bit more sense.

Then there’s that step-up. I love the step-up. But why exactly are we nixing taxes just because someone dies? It just means that they have to tax us somewhere else to make up for it.

Arguments for anything dealing with capital gains taxation is often couched in the people vs. capitalism debate. Higher taxation would have investors (who typically have more money than non-investors) pay more in taxes; it’s the “make the rich pay their fair share” argument. Keeping taxation as-is, or even lowering it like the inflation indexing would do, would free up more capital for investing and capital is the foundation of capitalism, some say.

You can make up your own mind.