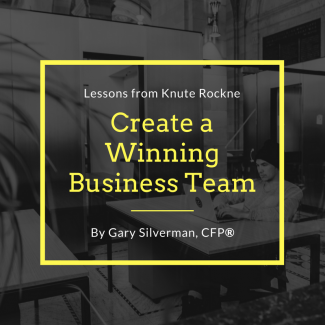 The legendary Notre Dame football player and coach, Knute Rockne, reportedly said, “The secret is to work less as individuals and more as a team. As a coach, I play not my eleven best, but my best eleven.” What is true on the football field is true in business. Today, I’m taking a little break from investment talk to discuss what it takes to create a great team.

Imagine a team with 11 quarterbacks. They can throw well, most can run well too, and they can all make quick, usually correct, decisions under great stress. However, my guess is that they won’t be quite as good at leaping up to catch the ball after a series of rapid turns, especially when they know full well that a giant is about to attempt to make their spleen dissolve.

Not that it matters anyway, since none are very likely to block worth a hoot; those passes would rarely happen.

Now, imagine a team with the correct amount of quarterbacks—better yet, imagine a team with one of the best quarterbacks around. Great news for the team, unless he is a prima donna. These types want the limelight, they want the accolades, but they don’t want any criticism. And don’t try to tell them what to do. You’ve seen them in sports, and in life. While they can be an asset at times, they also bring misery to those around them, causing the team’s goals to suffer.

Everyone has strengths and weaknesses. Every task in your business requires particular skills and knowledge. Some are yes/no tasks. People either can do them or they can’t, with no ‘in between’. Others tasks can be performed by most anyone, they just happen along a continuum: poorly, okay, fine, great, or fantastic...the greater their skills or knowledge, the quicker, safer or more efficiently they can perform the tasks.

Because of this, you need the right team of players to be able to cover all of your business’ necessary tasks. Sometimes in a smaller firm where you have done all of the tasks, you can determine this easily (perhaps not “easily,” but at least “easier”). But in a larger firm where no one is an expert in all of the tasks, study and analysis is needed, to determine what is actually done outside your corner office and which employees already have the ability to perform those tasks proficiently.

By inventorying both the tasks you can perform and the tasks your employees can perform, you can begin to recognize the gaps. Then you can either train an existing employee to fill the gaps or hire someone already skilled or someone with the ability to learn them expeditiously.

Even though I don’t follow football that closely, the draft always fascinates me. It is a clear example of putting a team together. There could be a stellar wide receiver available, but the team with the next pick might pick a defensive lineman or trade away their spot for quite a bit of compensation to a team who needs a receiver. They are not interested in only choosing the best players—they want to choose the players that create the best team.

And I imagine if you’re a business owner, you’d want the same for your company.