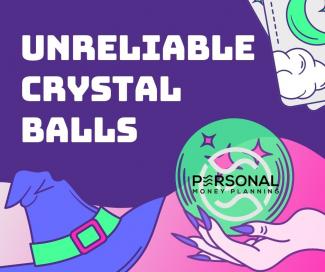 Crystal Balls Are Not Reliable

For the last three weeks, I’ve covered a few of the many things that can go wrong this year and mess up the economy and/or your portfolio. Today we’ll look at what to do about them.

From the first week, we have low-interest rates. To counter them you can play with credit and duration. What that means is you can buy a higher risk bond or one that doesn’t mature for a couple decades. That will get you more interest.

But in that same week, we also talked about these low-interest rates rising. If that happens it can bring down the value of your bonds. So now you have to be right about the direction of interest rates and more importantly when they might move.

Week two we started with war. Economies tend not to like war, though certain stocks do. Then again, we’ve been at war for quite a while and the economy did fine with it. So now you must decide what kind of war we might have, where we might have it, and how bad it might get.

As people predict we’ll be at war with someone just about every day (and fortunately, they are usually wrong) good luck with your prediction.

So maybe we’ll shift to one of our other week two topics: The next pandemic. I’ll just stop there. If you didn’t predict this one (where it would start, when it would start, how quickly it would spread, government actions, vaccine development, and efficacy), then how the heck do you think you’re gonna predict the next one?

But we also talked about the stock market and how it is very, very far along a bull cycle. That is much easier for you to predict and get out of the market now before it goes down. Except we could have said the same thing almost every year for the last decade…and you would have been wrong. So maybe you’ll play the momentum game and put more money into the market since (and please read the sarcasm in my voice) you’ll know when to get out before the next crash.

Hmmm…. maybe last week’s problem-check will be easier. We know that the world is awash in debt. Certainly, we’ll see massive defaults, or countries freely printing money, or taxes going through the roof, or… There are a lot of “or’s” that could happen. And each one would require a different response to 1) avoid it hurting your portfolio, and 2) positioning that same portfolio to actually be helped by it.

In all of this, you should start to realize that predicting what is going to happen is a bit of a fool’s game. Yes, I know you predicted correctly [fill-in-the-blank]. But I’ll contend that your success was likely as much luck as skill and that you are forgetting all of the other predictions you made that never happened.

So, what should you do about your portfolio in light of the many what-ifs that are out there? Diversify. Spread your money across a range of assets. Yes, that will put some of your portfolio in harm’s way if “it” happens, but you don’t have much choice unless, indeed, you can figure out the "it."

Boring, I know, but it works.