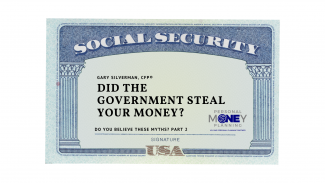 Did the Government Steal Your Money?

We began a refresher last week about the three biggest misconceptions I run into concerning Social Security—specifically retirement benefits. Here’s a summary of the first two:

Misconception #1: “The money I’ve put into Social Security is my money.”  Not true…your Social Security taxes are a tax that is used mostly to fund current retirees…you’ll be depending on the taxes your grandkids will pay.

Misconception #2: “The Social Security System is running out of money.” Not true, but it is running out of the ability to fully pay what has been promised, and that’s not good. But as long as they keep taxing us, it will have money for some level of benefits.

That leaves Misconception #3: “The government stole all (or most) of the money in the Social Security trust fund, which is why the system is going bankrupt.”

Reality: Okay, let’s answer this with a scenario. Let’s pretend you deposited money into your bank and bought a five-year CD. What do you think the bank does with your money? It doesn’t put it in their vault to sit there gathering dust. If they did that, they would have to charge you to keep it, rather than pay you interest. No, they take your money and loan it out to people buying cars, buying houses, starting a business, or a myriad of other purposes. Those borrowers pay the bank interest, and this is how you, the depositor, earn a bit of interest.

When you read “they take your money” you did not think that meant they stole it. That is the agreement you are making when you do business with a bank: they get to use it, and in exchange, they pay you interest. However, when very similar transactions happen with the Social Security trust fund, the “bank” in this case, the government, is accused of stealing the money.

Now while I’ve dispelled (or at least clarified) some common Social Security myths, it should be noted that the system is not set up to pay currently promised benefits. And, according to the Supreme Court, those promises don’t have to be kept. So, if Congress does nothing the system will still be able to pay out benefits. However, those benefits will have to drop by about 25% (on average).

So this means it is time, again, to tap Congress on the shoulder and remind them to get to work. I just hope they listen instead of throwing mud at each otherーgetting us dirty in the process.