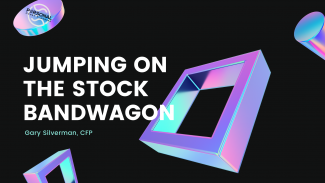 Does Jumping on the Stock Market Bandwagon Make Sense?

Anywhere from every couple of years to a couple times a year, there is a retail stock du jour. What I mean by that is a stock that people who don’t normally buy individual stocks (or stocks at all) suddenly want to buy…and usually with passion. Apple has been this stock off and on. Martha Stewart was on the list a decade or so ago. GameStop was there for a couple days. But the one I want to talk about today is Tesla.

Tesla is the kind of stock that reminds me of curling (the sport, not what you do with your hair): You either are enthralled or you just don’t understand it. It is reminiscent of over 90% of the Internet stocks of old. Google a list from 2000 and see just how many survived.

If you were lucky (it took a lot more luck than skill) and picked something like an Amazon, you did rather well. But it took a long time for it to be more than a mediocre choice after the dot.com crash. In the meanwhile, dozens of other hot names never made it past the crash. Twenty years gives us a lot of hindsight. But you must look at the losers as well as the winners to get the picture.

Forgetting that last part is the allure. Pick the Amazon and skip over Pets.com, Webvan, eToys, and the rest, and you’re on your way to mansions and jets. Pick the wrong one and you’ll swear off stocks for a decade.

I think that’s where we are with Tesla. It’s a good company. It makes a great product. It’s even starting to make a little money. But the question is whether it is worth what you’d have to pay for it.

Many would point out that it doesn’t matter how much money it is making now…you buy a stock for what the company will make in the future. That is true. So, let’s look.

Two ways this might happen. The first is that we double car sales in the next decade or two and virtually all of that expanded market is sold by Tesla. The alternative is that most every other large car company dies or is bought by Tesla, meaning Tesla ends up selling 9 of every 10 cars going forward. (Yes, I know they do other things, but you get my point.)

Tesla is just the current in-your-face example of a stock that enthusiasts make every excuse to justify the price they are paying. There’s lots to like about the stock. But’s it’s a gamble that not everyone should make.