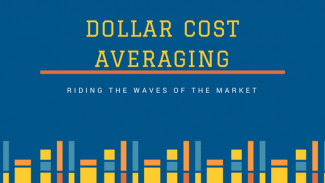 Last week I told you about Dollar Cost Averaging (DCA). It’s what many financial folks recommend if you happen upon a pile of cash. With DCA, instead of putting a lump of money into your investments, you split that lump into equal amounts and invest each piece at fixed intervals.

DCA is supposed to help you by mechanizing your trades so that emotions don’t take over. If you follow the process, you’ll end up buying more shares if the market is down and less if the market is up. Thus you will, on average, pay less for your investment and generate greater profits.

The problem is that people let their emotions about the market control their actions. They second-guess the DCA strategy and put less (or no) money in when market is down and can’t wait to dump in their cash when the market is soaring. Thus, they end up paying more than they should have and generate fewer profits, if any.

Yet that is the sentiment these days, and an understandable one. After all, stocks, real estate, and a number of other investments have gone up a lot since the financial crisis and even more in 2017. I’ll be the first one to tell you that the longer a market has gone up and the higher it gets the closer we are to a correction. We’ve seen a bit of that already in 2018. So, fine; go ahead and do the dollar-cost-averaging strategy.

At our firm we typically lump-sum in amounts worth less than 20% of what a client already has invested. More so if we just went through a correction or crash. The rest of the time and with the rest of the assets we use DCA.

You could, of course, divine the future and wait with your lump of cash until the market is about to go up and then put it all in. Good luck with that. There is a two-thirds chance that a year after you could have put the money in the market, it is already up and you missed it.

I know people who went to cash around the time of the financial crisis and are still waiting for the right moment to move back in the market. I even know one person who is still sitting on the sidelines from when the tech bubble burst. It’s safe to say they’ve missed out.

So, if you’ve been given a lot of money and are wondering when to invest it, go ahead and Dollar Cost Average or go ahead and put the lump sum all in at once. Just don’t try to second guess the market in either case. It seldom comes out well.