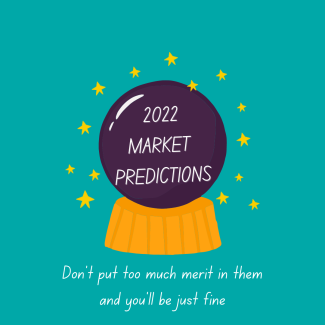 Don't put too much merit in market predictions

Pretty much every day since the new year, I’ve been getting market predictions in my email box, offers to attend “our view of the markets in 2022” webcasts, and even a few folks who want to have a quick chat about what the markets will do this year.

While I do attend some of the webinars as they count as part of my continuing education requirements, I can’t say that I take the information to heart. The reason? They’re wrong.

Without naming names, here are some samples from last year:

“We are positive on the outlook for the fundamentals for Chinese equities in 2021…” Well, according to the MSCI China Index, stocks fell over 27% last year.

“The yield curve steepens, but a concomitant increase in inflation keeps real rates near zero.” Interpretation: Interest rates go up, but so does inflation, so your fixed income investments just break-even relative to inflation. Reality? Your purchasing power from investing in US Treasuries dropped by 2.32%.

“The first Fed (interest rate) hike is unlikely until the second half of 2024.” In December the Fed announced plans to raise rates three times in 2023.

“The dollar sinks to a five-year low.” Seems, it ended up a bit lower to the Canadian dollar but was higher relative to the other major currencies. Not my definition of low.

As you can see, predicting markets, be they stock, bond, real estate, currencies, or pretty much anything else is fraught with risk. That’s why you won’t find any short-term predictions in this column…unless they are rather general and preferably vague. Like this one: The market will be volatile this year. Note I didn’t say how volatile or which way the next big movement is.

Predictions are easy. Sometimes they are right. Often, they are wrong. Don’t put too much merit in them and you’ll be just fine.