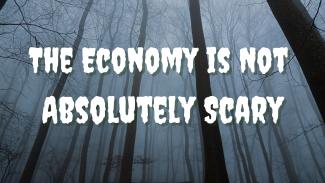 The Economy Is Not Absolutely Scary

The economy is scary but not absolutely scary. I made up the term, so I will now define it. For something to be absolutely scary, it must be something that will happen and will be bad for you, and there is nothing you can do about it. So, let’s go down the list (it is “the” list because I came up with it and this is my column).

As usual, this article is written well in advance of publication, so things may have changed, but as I’m looking at my computer, the stock market has had a nice little rally, even with the recent pullback. IMHO this rally is fake. (For those of you not current on texting vernacular, IMHO stands for In My Humble Opinion, though I have been questioned about the humble part.)

We had a rally at the end of January, during most of March, the end of May, mid-June through mid-August, early September, early October, the last part of October, and now this one. Every one of them fizzled out. We even had a little bull market, yet all the indexes are still a lot lower than they were last year. I have no problem saying this rally is scary because I fear it will end and we will experience new lows sometime in the next few months.

However, I do not think this is absolutely scary. Eventually the market goes back up no matter how bad it gets (aside from an apocalypse, of course). And since I have told you over the years how to prepare for bear markets, you could have made changes (i.e. lowering exposure to stocks, etc.) to ensure it is not too harmful to your portfolio.

I also see a recession brewing. Though many economists are starting to predict the U.S. might miss it, most agree Europe is still in trouble. Still, almost being in a recession is not great. It’s where we have been for a while. Most of you haven’t liked it, and it still leaves a scary scenario whether we barely miss it or not.

We can see a recession is not absolutely scary since 1) it might not happen, 2) it might not be bad for you, though maybe it already is and 3) like bear markets, there was something you could have done to protect you from the worst of it.

Housing is another scary area. As is inflation. As is consumer debt. As is government debt. As is Social Security. As is…well, you get the idea. We’ve covered these topics occasionally throughout the year, but today the message I want to leave you with is that generally, while it may seem scary, preparation (mental and/or fiscal) can help protect you from the brunt of “it”—except, perhaps, in your imagination.