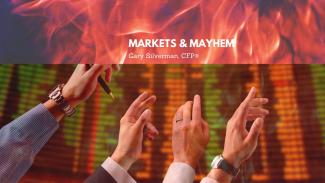 We’re spending the new year looking at potential problems that can wreak havoc with the markets (and your investments). Low-interest rates started us off last week—this week we look at war.

War in any form is not a nice thing. And while some stocks will do well because of a war (think the defense industry), most do not. How much negative effect depends on the company and the war. If someone blew up a dirty bomb at the Port of Los Angeles, shipping to and from Asia would drop dramatically; supply chains would be disrupted; the entire country would be (rightfully) scared, and economies would plummet.

However, we are currently at war; yet without the nightly headlines, few seem to notice.

With Russian poking at the west, China trying to take over the South China Sea, and terrorists eager to show us a thing or two, the world is scary, and war is more a probability than we may think. Sure, current conflicts might be regional, but most unlimited wars began as limited ones.

Now let’s shift to pandemics. No, not this pandemic, the next one. Let me assure you: There will be a next one. It might not be as bad as our current disaster, but eventually, we’ll get something even worse than COVID. This might be an act of war or an act of God. It might happen in a year or several decades from now.

No need to tell you what can happen due to a pandemic. Just know that the lessons we are learning now will likely be forgotten when we get to the next one. After all, the government had plans in place in case a pandemic hit. It hit. Did it seem to you like we had a plan?

Next week we’ll look at a few more problems that can derail economies and the markets. But before I leave you today, I want to get you out of any funk I may have put you in.

As I’ve said in the past, if you can’t think of a dozen problems, you’re just not thinking hard enough. Markets going down are a regular occurrence. Something always causes it. Predicting when it will happen is hard. Being prepared for it isn’t. We’ll get to my commentary on that soon enough.