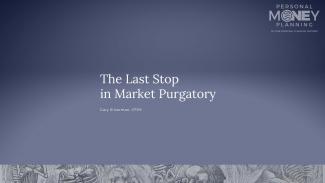 I’ve been using this space to dwell in market purgatory, meaning, I’ve been looking at several indicators or possible events that spell doom for the markets and the economy. Behind all of this is my pretense: If you can’t think of a dozen scenarios where everything goes wrong, you’re not really trying.

What I’m trying to do is two-fold. First, for those who are always optimistic about the markets, this is a reminder that things aren’t always so good. In fact, about one-third of the time things are bad. That’s a lot.

At the same time, for those who seem to always see gloom in the forecast I’m reminding them that most of those forecasts never come to be. Yes, one-third of the time they do, but these folks must see that it’s the rest of the time—the majority—that make things worthwhile.

And in that vein, let’s look at the world’s debt crisis. Whether it is a crisis or not is open to debate (it is, and I’m right… debate closed). Right now, the world is awash in debt. And right now, that really doesn’t hurt because interest rates are so low (as we’ve discussed recently).  But what happens when interest rates start moving higher? It’s not like we’ll have the money to pay off all those debts.

No, businesses will have some hard decisions on what projects they will not be doing. Governments will have to cut programs, raise taxes, or likely do both. Defaults will occur.

Let’s talk about all those government programs. This is not just an American thing; the world governments have promised their citizens things—that’s easy and fun. Paying for things, however, is hard and not so much fun. Where does this lead? Usually in adding programs and cutting revenue. It’s no wonder why Social Security and Medicare is in such a financial mess.

No need for the politicians to worry about it though… they just keep kicking the can down the road.

A few weeks ago, I listened to a podcast pitting two economic experts from the same firm arguing about whether this year would be a good one for the markets. Two portions of this conversation worried me.

Worry #1: When people agree, I get worried. In this case, they both agreed the markets would do fine.

Worry #2: Most of the economists I talk to say that the bad financial times are still ahead of us (just not this year).  Instead of arguing that point, these experts seemed to believe we were already in the thick of the troubles and argued whether the troubles would be felt as a sudden hit or spread out over time.

Strangely enough, I agree with them. Time for you to reread Worry #1.

So, Gary has now given you three weeks of gloom and doom. Next week, we’ll discuss what to do about it.