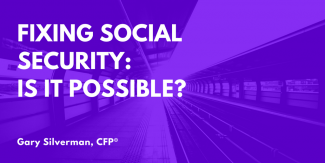 For the last two weeks we looked at the trouble with Social Security (the program is bringing in less money than it pays out and will run out of reserves in about 16 or 17 years). One potential solution increase the revenue into the system by raising taxes. Today we look at how to solve the problem by changing the spending side. By definition, spending solutions all, in one way or another, cut the amount of benefits paid out.

One of the most often mentioned ways to reduce benefits is to raise the full retirement age (FRA). This is one of the changes done last time we tackled Social Security under the Reagan administration. Back then your FRA was 65. It is currently rising to age 67. So why not keep going to 68, 69, or even 70 years before you receive full benefits? This is also related to one of the main reasons Social Security is in trouble…we’re living longer. Raising the FRA would include some grandfathering, just like there was last time.

And then there is just reducing the benefit itself. This is stealthier as it involves a rather big formula that while public (just look on the SSA.gov web site) most have no idea what’s in it. So rather than explain all the pieces and parts let’s just say there are a number of proposals and all of them in some form and fashion reduce the benefits paid out. The more they reduce, the better the fix.

Ah, but there’s one more proposal to consider: Means testing. Simply put this would reduce or eliminate benefits to higher income earners. Interestingly, this tends to also be unpopular even from those who in no way would be affected. Not that big of a deal though, as there are so few higher wage earners that this might fix about 20% of the problem, at most.

Another popular measure is to base cost-of-living increases in benefits to a “chained” indexing formula. It would take a bit long to explain what this means, but the effect would be that cost-of-living adjustments would be smaller in the future.

While we are on the topic of cost-of-living I want to discuss one other “fix.” Currently the cost-of-living adjustments are based on the Consumer Price Index for Urban Wage Earners and Clerical Workers (CPI-W). There is another index out there, the CPI for the Elderly (CPI-E). The CPI-E is designed specifically to measure the spending habits of those 62 years-old and up, most of whom are retired. Health care spending, it should be no surprise, makes up a lot more of their expenses.

Unfortunately, CPI-E tends to give higher inflation rates than CPI-W. My thought is that if you are going to adjust for inflation, you might as well use the more correct measure and find a way to pay for it elsewhere. To do otherwise is a bit dishonest.

Next week: My take on what we should do.