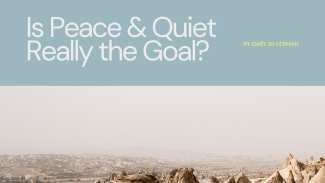 Is the Goal Really Peace & Quiet?

Gary, having entered his 65th year of life has had many disjointed subjects on his mind in the many decades he’s been writing about money. This is one of those thoughts. It has nothing to do with money.

“I just want peace and quiet.” Or so I’ve heard people say. But I’ve never actually found that to be true. Take the parent who notices they haven’t heard their children’s normal racket. Do they enjoy the peace and quiet? No, they immediately investigate what is going on. Because “quiet” doesn’t always mean “peace.”

I spent several years on a submarine. When I’d come home from deployment, I would often wake up, startled, in the middle of the night.  My unease wasn’t because I heard an unexpected noise, it was because I didn’t hear an expected one. On a submarine, there are a variety of whirling pumps and motors, the sounds of humanity from the 140 people crammed into a steel tube, and the whooshes and flows of the pneumatic and hydraulic systems.

Quiet meant something was wrong. And something being wrong could easily end up killing you. You knew that consciously and subconsciously so that even when asleep your brain would sound an alarm if the regular sounds went away.

What prompted these thoughts was a friend of mine whose husband has been out of town. She noted that she missed his snoring. She missed it for the same reason the parent or the submariner misses their sounds…it meant something was not normal, something was amiss.

Silence is often nature warning you. I’m not much of a camper. I don’t like bugs, I don’t like sleeping on the ground, and I’ve got a perfectly good bed at home (or back at the hotel). But I’m outside quite a bit and I know folks who camp, hunt, and fish. They will mention that one of the joys is to get out into the peace and quiet of nature.

Have you ever tried to go to sleep out in nature? It is an extremely noisy place. Okay, I’ll admit that the decibel level is a lot lower than it is in a city, but that just makes a lot more sounds a lot more noticeable. Did I mention the bugs? While I assume they are not trying to get eaten, it is not that obvious by all the noise they make. Add to that the rodents, snakes, bears, and tigers trying to get in my tent (I do have an active imagination) and it’s quite hard to get to sleep.

That is, until those sounds replace those of the city to become your new normal. So perhaps we should be more specific and say, “I just want fewer hectic activities and normal noises at an appropriate decibel level.”

Okay, I’ll admit, “Peace and Quiet” has a better ring to it.