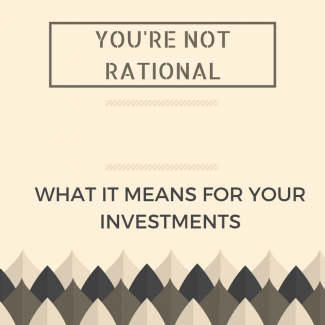 He knows when you're not rational (no, not Santa)

Richard Thaler is a name you may not know, but if you’ve read my columns for any length of time you are familiar with his work. Thaler, from the University of Chicago, won this year’s Nobel Prize in Economics. What he has done is to rationally examine the effects of our irrationality when it comes to economic decisions.

It probably does not come as a shock to you that people (certainly not you) can act irrationally when it comes to money. However, when economists come up with many of their theories on how the economy works, they base their findings on totally rational beings. Imagine the person who only buys when they have a need, reduces their purchases of wants whenever the price increases, easily delays gratification in order to instead invest for future needs, knows where to find all relevant information to make an informed choice, and makes that choice with reason eschewing emotion.

For me this person sounds like an ideal client; to many this person sounds kind of boring. This rational being is an imaginary construct to allow economists to envision how changing X would affect Y. It’s hard for them to do that if they have to consider how each of over 7 billion little human entities will react. So they make one rational one and imbed it in their theories.

Interesting things happen when these very well-constructed theories react with those 7 billion creatures, however. Don’t worry, economists are really smart, they know humans are not rational. But it took a while before serious work was done in order to figure out the irrational human side of the equation. In fact it was two psychologists, Kahneman and Tversky, who first won a Nobel Prize in Economics in this field. It later became known as Behavioral Economics. Well before they won, Thaler met them when visiting Stanford back in the ‘80s and collaborated and built upon their work.

Let’s look at just one tiny nuance Thaler was able to glean in his studies. If you remember earlier columns I’ve warned about something called Recency Bias. This is one of Thaler’s observations of the human mental process that makes them think what is happening in the now will keep occurring. People’s tendency to put money into the current hot stocks or dumping their savings into a market bubble is an example of this. Another example is when they sell off their investments after the market has dropped using the rationale that they need to get out before they lose it all.

Examined logically, humans would buy low and sell high. Thaler was able to theorize, measure, and then predict that the average human didn’t behave all that logically. His other findings have led to advances in retirement savings, including 401(k) automatic enrollment.

Unfortunately Behavioral Economics is still treated as the ugly Economic stepchild by many economists. Hopefully this second Nobel Prize gives a boost to the standing of this area of study in the economic community.