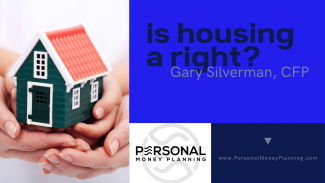 Is Housing a Right?

As I sit here writing this, I am looking at a picture of a US Congressional Representative holding a sign that reads: “Housing is a Human Right.” Initially, some might fume at this, but after the initial flush of anger subsides, I don’t think that anyone would say to another, “You don’t have a right to housing.”

Some will ignore the renter and say that if they can’t afford housing it’s their own fault: “Get your act together and scrape up enough to rent somewhere or find a sympathetic family member to move in with. If you end up homeless, that’s on you…”

Others will ignore the landlord. “You own the house, so you’re in a better position to ride out the crisis. You took the risk of being in the rental business. The risk isn’t panning out. That’s on you. Guess you should have planned better. Call us if you become homeless...”

Ignore the renter and you ignore that circumstances can and do happen that are beyond someone’s control. Ignore the landlord and you are saying that changing the rules mid-game is fair and just.

The reality is that someone is going to need a bailout here. If it’s been a year since rent has been paid, does anyone really think that suddenly a windfall will come to shower the renter with money to make up back rent? Does anyone really think that a landlord can forgo a year’s income while still being required to provide maintenance without damaging their own finances?

Yes, there are governmental programs. I will assume that readers of my column are also readers of the news. Do any of you have the opinion that the money is quickly and efficiently making it to those in need? As I’ve pointed out in previous posts about welfare systems, you always end up either giving money to those you don’t intend to, or withholding it from those you do, or both (I haven't seen a scenario when it’s neither). So, do we waste money or deny benefits in our design? Thing is, neither is a good answer, but it is one that must be asked.

And who gets to decide?