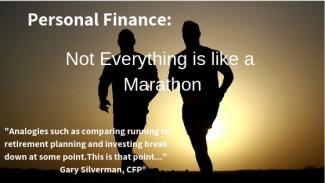 How Training for a Marathon is like Managing your Finances: Lesson 8

It was four weeks before my marathon attempt which meant it was time to do my longest run to date: 20 miles. As I had done an 18-mile run with little difficulty just two weeks prior, I did not anticipate any problems.

A friend of mine was running about half that distance that morning so I joined him for comradery. I know one of my weaknesses is starting too fast in a race. Start too fast and you are burned up well before you have a chance to push to the finish. There’s a scientific explanation involving lactic acid accumulation and carb depletion, but just take my word for it.

My friend is a faster runner than I and was running a shorter distance. It wasn’t until around mile 10 that I noticed I had run too fast a pace. I wasn’t worried. I could simply slow down, and after all, I did have that successful 18-mile run.

When it comes to investing for retirement, what happens early on can have an effect a decade or two later. If you luck into a bull market as you begin, you’ll likely end up with more money than you need (I’m certain you’ll find a way to deal with that). The reverse is also true. A bear market soon into your retirement and you’ll have a hard time catching up if you are not prepared for it.

Now, you can’t change what the market is going to do, but you can change how you approach retirement. Assuming good markets or even average markets will start your race is foolish. It might happen, but it might not. If instead you plan on a downturn to greet your retirement, then you will at worse have more money than you needed in the end.

I didn’t assume I’d run a moderate pace to start my 20-mile training run. I didn’t think. I was enjoying the day and the company. That lack of awareness caused the last 6 miles to be agonizing. Agony isn’t fun.

Analogies such as comparing running to retirement planning and investing break down at some point. This is that point. That 20-mile run was just practice. I took the lessons from it into my later preparations for the marathon run.

In life, you often don’t get do-overs like that. Instead you need to see what happens to others, using their examples as your “practice” and learning from their victories and failures.

After the 20-miler my long runs became shorter and I entered what is called a taper period. Here you reduce the amount of training to allow everything to heal. You don’t stop training, you are just trying to maintain what you have built up to by then.

Summer had lasted longer than I thought. The cooler days of autumn seemed to be missing. But that wouldn’t stay for long, for the weather forecast was starting to look a little bleak.

More about that in two weeks, but first I want to draw another lesson from my pain. See you next week.