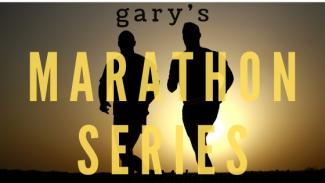 How Training for a Marathon is like Managing your Finances: Lesson Five

Last week you heard my Circle Trail tale of injury. The moral of the story: running 14 miles on cement, when not trained properly to do so, hurts. Today you’ll learn how that turned into a goal to run a marathon.

Before I was injured, I had planned on running the half-marathon race at the Run for 57th AHC event in Possum Kingdom (it’s a fundraiser for Operation Home Front, which helps military families). Instead, my post-injury coming-out party would be the 5K race at the event. The lessons I learned on the Circle Trail stuck, so I backed off on the half-marathon idea. Running the 5K was plenty to allow me to see how well my healing had gone. The 5K run went well with no pain or really any discomfort. I felt I was pretty much over the worst of it.

But it got me thinking. I was going to run the half-marathon if it wasn’t for the injury. With further recovery and training, that half-marathon would be quite doable. But if I made and followed a sensible plan, a realistic plan, I could set my goal to run not just that, but a full marathon.

That’s when I began working on how to make it achievable. That it would be achievable was not an issue. Ego told me it was. Plus, I regularly run with people who have accomplished the feat—many having done it multiple times. (Admittedly, it didn’t quite dawn on me that most didn’t do this at age 60 with less than 2-years of running experience, but I’m young-at-heart.)

One thing I did decide on was that I preferred to run the Route 66 Marathon in Tulsa. I had run the 5K the previous year that’s attached to the event. That meant that I knew the area, understood how the community handled the race, had eaten at many of the area restaurants, had stayed at the hotel nearest the finish line, and was familiar with the terrain. Many unknowns were eliminated from the equation.

The marathon was next, six months hence. This time I was not going to allow the race date to dictate my training. If my research created a training plan that could reasonably have me ready in six months, then great. If not, I would instead run the Cowtown Marathon in Fort Worth 3 months later (and yes, I had backups to that).

There’s a lesson to be learned here…but you’ll have to come back next week to learn it.