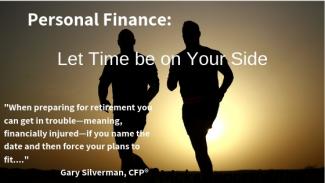 How Training for a Marathon is like Managing Your Finances: Lesson Six

Last week you learned how I determined my goal for running a marathon. I purposely allowed one variable to slide: Time. Now, in setting a goal they usually don’t tell you to have part of the goal be changeable. After all, it’s hard to achieve the goal if you keep changing it. But life has this habit of not going to plan, and if that happens, your goals must change. The part of your goal that changes depends on your priorities. And reality.

Remember the “SMART” of my goal: The Specific was to complete a marathon. The Measurable was that the marathon was 26.2 miles. “A” stands for Achievable. Thousands of people similar in age and general health complete one or more a year, so that was a given. It was Relevant as it is related to my running hobby (a bucket list item if you will). And for Time, I gave myself six-months of training time. According to a wide variety of sources, given where I was in my running prowess, that would be enough.

But, as they say, I’ve been around the block a time or two. Things come up, like my previous injury. It was possible that outside events might slow down my ability to train. If that happened, I wanted to know in advance what part of the SMART goal would change. In my case the priority was finishing a 26.2 mile marathon. If something threw my training plan off it would be time that would suffer. I wanted to finish in under six hours…but it was more important that I finish. I wanted to make my attempt in six months, but it was more important that it happen— whether in 6, 9, 12, or 24 months.

When preparing for retirement you can get in trouble—meaning, financially injured—if you name the date and then force your plans to fit. You might force yourself to take more risk than you could stand, resulting in panic and a sale in a down market. You might have you quit your job before you had enough money to live through the variables of retirement. You might spend more in the early years and draw down your assets so as not to have enough as you grow older.

Instead of forcing your plan to fit the reality you run up against, it is important to run the numbers and see what is reasonable. Hash out the problems that could crop up, and come up with contingency plans to deal with them. And regularly examine how your plan is going and adjust as needed.

Now that I had the SMART goal figured out for the marathon, it was time to flesh out my plan.

See you next week.