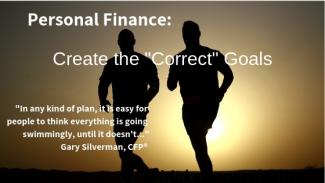 How Training for a Marathon is like Managing your Finances: Lesson Three

Before I would attempt a marathon, I had the idea to run 14 miles on the city’s Circle Trail. (It’s not a complete circle yet, but we’re slowly getting there.)

The day of the Circle Trail event I dropped my car off at Lucy Park (one end of the event) and my wife drove me over to the big hill by the lake (the other end). Off I went. Everything was working well. I stopped at every rest stop in accordance with my plan (one even had snow cones). My hydration was going well (April in Texas may not be summer but try running even during a pleasant day and see the sweat pour out). I enjoyed seeing parts of Wichita Falls that in over a quarter century here I had never seen.

And yes, I finished the trail. I had accomplished my stated goal. I felt good. No major soreness, no cramping, no bumps or scrapes. My “plan” on how to prepare for the run worked!

Certainly, my goal of making it around the trail was met. But perhaps my goal wasn’t as complete as it should have been. Because implied in that goal was that I’d be able to walk the next day. Instead, upon waking the next morning, my body explained to me just exactly how it felt about having traveled 14 miles on cement. I found that due to poor planning on my part, I could, at best, waddle around. The movement called walking was just not happening.

Actually, the problem was not poor planning; rather it was no planning. That resulted in poor training which in turn, resulted in a body that was not ready to run on 14 miles on concrete.

In personal finance, I’ve seen many people do the same thing. They create a goal. It might be to save $500 a month or 10% a year or $1million before they retire. Reaching that goal makes everything seem great. However, focusing only on getting to a goal that is a “guesstimate” means the goal may be wrong or incomplete.

The goal probably should have been to save enough money to be able to live comfortably in retirement starting at a certain age. The first step: determine how much that is, then calculate how much a month or what percent a paycheck or what amount would need to be saved to reach THAT goal. Instead, many people felt good reaching the goal they set rather than the goal they should have set.

In any kind of plan, it is easy for people to think everything is going swimmingly, until it doesn't. Ten years ago, a lot of folks found that while they thought they had enough money to live out the rest of their lives in comfort, the Financial Crisis came back and said, “no.” This was exactly how achieving my Circle Trail goal impacted me.  I thought everything had gone well with my run until I woke up the next day and found that pressing my foot down on the ground was met by excruciating pain. In other words, my foot said, “no.”