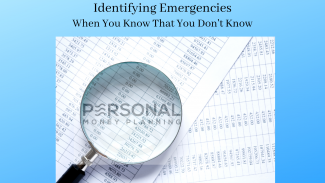 Emergency Fund: For the Unexpected

Last week we began the process of figuring out your emergency fund (or contingency fund; or rainy-day fund…call it what you want). I emphasized that very few people have enough money to set aside for any possible emergency—and those who can probably don’t need one to begin with (think Jeff Bezos). But just because you can’t protect against everything doesn’t mean you shouldn’t protect against anything.

Let’s first look at what should not be part of your emergency fund: Things you know are going to happen. For instance, the savings for your next car is not an emergency. You know it is coming. You know (or can likely figure out) how long you have to save for it. Want a $24,000 car in 5 years? Then start saving $400 per month and you’ll have the money when you anticipate it.

An emergency is when something you don’t know will happen, happens. In the above example, one year from now you get into a wreck that is your fault. Your insurance will pay for the other person’s car and the value of your car. But there is a deductible and the current value of your car won’t buy what you were hoping for. Sure, you’ve got $4,800 saved up, but you might need more than that plus the insurance proceeds to make everything mesh together. There’s your emergency.

So, your emergency fund should have enough in it to handle deductibles on your insurance plus additional monies to buy-up to what you will want. Many of these items you probably don’t have insurance for, so the entire replacement is on you. Think of all the things you might have to replace and can’t wait on, such as a car, roof, appliances, etc. There’s also the expense of getting sick: medical deductibles and non-covered time off from work. And the family emergencies: funerals, weddings, and trips to look in on ailing parents. (Note the last bit you don’t really “have” to do, but you will.)

Oh, and about that wedding: A plane ticket and hotel to attend your son’s impromptu wedding across the country is unplanned. You deciding to chip in $40,000 for his dream wedding…not really an emergency.

About that wedding version 2: Knowing that you want to pay up to $40,000 for your son’s wedding is something you can save for even if you don’t know exactly when or if it will happen. If it doesn’t, you can retire earlier or spring for the nicer house.

We’ll get more into saving for things in later articles, but the point today is that there is a difference between saving for something you know is going to happen and saving for an emergency you don’t.

Making a list of every unexpected thing that could go wrong and adding up the totals can be rather depressing. But unless you are the unluckiest person on earth, they won’t all happen, and very few will happen all in the same time period (unless it’s the year 2020). So, while you might have $5000 saved for appliances you might have to replace, they are not all going to break at the same time. (Probably.)

But we’re not done yet. See you next week.