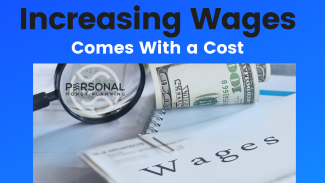 Increasing Wages Comes with a Cost

As society changes, the idea of what is fair changes with it. Last week we began looking at the minimum wage. This week we continue.

Let’s assume that the minimum wage goes up to $15 per hour and that this applies to everyone…no exceptions. Like most everything, there is good and bad that will come from this.

The initial good is obvious: Those currently earning less than $15/hour will get more money. This will allow them to afford more food, clothing, and shelter. It might open up educational opportunities. Maybe they could save for the next car or even for retirement. There might be some paycheck left at the end of the month. Lifting close to one million out of poverty is certainly a good thing.

People who have more money spend more money. If you have a business this means you can bring in more income. Charities who are already stretched to the limit will have fewer people needing services and maybe a few new donors.

If you raise your starting wages to $15 then it is likely that businesses will find it necessary to raise wages across most of their lower-paid staff. After all, if you have someone who’s been working for you for years and has finally gotten to a point of earning $15 an hour, it’s not going to sit right that the new kid cleaning up the back dock is making the same amount. That’s why a lot more than those earning under the new minimum wage will benefit.

Many folks think that’s just fine. They say, “We’re tired of the big-wigs in the corporate high-rises and the large stockholders getting rich off the backs of poorly paid workers.”  They continue, “It’s about time Walmart and others pay what is fair.” (For a discussion of “fair” please read last week’s article.)

This, of course, ignores the fact that there are millions of tiny businesses out there—the “mom & pop” ones. They are trying to eke out a living, too, and are one bad decision, one pandemic, or a recession away from bankruptcy.

Choices will have to be made, and even the proponents of doubling the minimum wage admit that in many cases the result will be layoffs (estimates are well over one million) or fewer entry level jobs. But that will be offset, they say, by more business coming through the door due to the higher wages, and new jobs created because of it. I agree with them, but that will be of little comfort for a graduating class that can’t find jobs, and current workers who are let go so that a company can afford the ones who remain—if they can keep the door open at all.

As I alluded to last week, and state now, raising the minimum wage will help move the economic structure of the country toward greater equity; but it will come at a severe cost to many, and that shouldn’t be ignored.