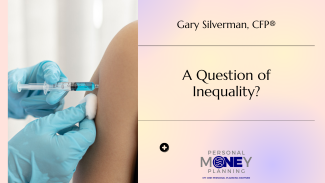 The Inherent Inequality of Life?

In my previous column, I used a rather benign example of the differences between a business owner and his employee wanting to pay for their children’s college to describe inequality. While that was limited to the workplace, today I want to expand my example globally.

Nowhere in this am I preaching capitalism or socialism. I just want us to think of the nuances that make inequality a lot harder to solve. And, although the pundits spout off about the necessity of “fixing it,” do you think that’s supposed to be our goal? (If you want to know which side I am on, take me to lunch.)

You may have heard that there is a virus called COVID running around, and scientists have a vaccine that can mitigate both transmission and the severity of the illness. (Let’s ignore that this is all a hoax, and that Bill Gates is putting microchips in all of us for the moment…humor me.)

The press seems to be falling over themselves saying that the government is too slow, and it isn’t doing enough to get shots into people’s arms. The next minute there are stories lambasting the government for putting shots in American arms when they could be going to poorer countries. (Either way it gets folks to watch the news, be marketed to, and make the news channels money; but I digress.)

Let’s say that your child needs a medical procedure and that without it she may die. It will cost you $20,000 out-of-pocket after the insurance company pays its share. Do you get this procedure or send the money to a medical mission where that same money could inoculate children in another country against mumps, measles, malaria, and polio saving 10s or 100s of lives?

I know what I’d do. I’m not sure I’m proud of it, but I’m also pretty sure you wouldn’t change my mind. Not that most of you would. That exact scenario happens every day. What helps us sleep at night is not even thinking about what else we could have done with the money.

Of course, if you were to use the numbers to make your decision, you’ll see that from a spreadsheet standpoint, the answer is clear: Let your daughter take her chances and send the money to where it would do the greater good. (Oh, and get a divorce attorney, because your spouse is probably leaving.)

That same situation is sitting in front of us. Do we give one shot or two, two shots or three? For our people’s benefit (in our city, county, country), the evidence seems to say: the more the merrier. But is that morally justified when so many in the world who want to be vaccinated have no access to the vaccine, especially in the midst of new variants? Each of you has an answer, and I’m guessing you are uncomfortable with it regardless of which one you chose.

That’s the problem with inequality. Whether it be in the family, on the block, in your city, in your country, or the world. Whether we are talking about water, food, electricity, internet connectivity, healthcare, housing, education, or a litany of other issues, careful examination often results in choices that are bad either way you look at it.