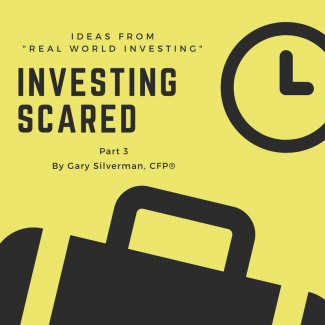 In 1971, Led Zeppelin released the song, “Stairway to Heaven.” This rock-n-roll classic has made Page, Plant, and company a whole lot of money.  Here I want to talk about a staircase that can make you money…if it doesn’t scare you off.

If you step back and take a look at a chart of the stock market from before the Great Depression through the present, you’ll see what looks like a diagonal line running from the bottom left to the upper right. That’s because, in general, the stock market goes up—which is of course why people want to invest in it.

Yet take a step forward and look again. What you’ll see is that the line isn’t straight. Instead, it zigs up and zags down, sometimes violently. The Great Depression that my parents went through and this latest Great Recession that we’ve experienced aren’t the only times folks have lost a lot of money. But a jagged line that looks like a ramp doesn’t really describe the chart that well. That’s where my stairway theme comes in.

Upon closer inspection, the chart of the stock market really looks more like a staircase than a ramp. The upward slope leading up to the Great Depression was followed by a flat decade-and-a-half. Next was another upward slope that lasted to the late ‘60s, when things flattened out again.  Finally, the market took a swing up with the great bull market of the ‘80s and ‘90s only to be flattened out by the tech bubble and burst.

Back to my stairway: The flat sections look flat (at a distance) but they are a combination of both soaring rises and drop-like-a-rock periods. I like describing these times as “flat in an exciting way.”

If you were to close your eyes at the start of one of these periods and open them at the end, you’d find that the stock market seemed to not have changed much: hence the “flat.” But if you kept your eyes open, then you would have experienced a roller coaster ride…the jaw-clenching, white knuckle kind. That’s the “exciting” view of “flat.”

Take a hint from the Led Zeppelin guys; no matter the ups and downs in music, they stuck it out—and are still earning residuals from that song. You can do the same if you have their stamina. It’s not always easy. Just last year, Led Zeppelin had to show up in court to prove that they deserved to receive all of those royalties, as they were sued for copyright infringement. They won; but appeals have been filed. See, a roller-coaster.

Now, I know what some of you are thinking: “Things are different now.” Yup, they are. They always are. But through all the differences I think you’ll see that there are more constants in this topsy-turvy world of investing. More on that next week.

Gary Silverman, CFP® is the founder of Personal Money Planning, LLC, a Wichita Falls retirement planning and investment management firm and author of  Real World Investing (available at amazon.com). Contact him at www.PersonalMoneyPlanning.com