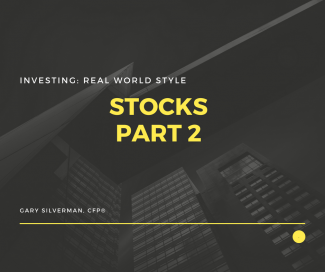 Back when I was younger, before I was an investor or a financial planner, I looked at charts of various investments and saw that stocks return more than anything else. Hence, I believed that investing all my money in the stock market was a brilliant idea. But those charts were looking at very long time periods. Very few of us have a 50-plus year investment horizon. Shorter time periods, as you’ve likely experienced, can give very different results.

Even when looking at 10-year time horizons that 10% average on stocks can be elusive. For example, after the 2008 financial crisis you would have seen pretty much no return if you had looked at the 10-year average on large U.S. stocks—not a 10% “average” return. And I don’t mean nothing for just the year…I mean nothing across the decade. Adding insult to injury, those thought of as “naïve” because they stayed away from sure riches in the stock market and had all their money in bonds would have seen growth rivaling what stocks normally do.

Since then, I actually have had my money invested in the stock market and have lived through a few financial crises, both personally and nationally. Initially, I gave my money to a “financial planner” (at least that’s what she called herself) to manage it. Imagine my dismay when she managed to lose half of my money…and do so in a bull market. This particular adviser wasn’t concerned with my portfolio—she was more concerned about the commission she used my money to earn.

My experience with that stockbroker ended up being a good one—at least in a roundabout way. Because she lost my money, I was inspired to start studying how investments work. I’ll never be done studying. It’s like walking to the horizon to see what’s there: You’re never quite done walking.

In my studies I found that indeed stocks return more than bonds and bonds return more than cash. I also learned that times similar to the financial crisis or the tech bubble bursting happen now and then. As most readers know, the stock markets around the world can drop over 50% in just 12 months, though thankfully that does not happen often. My education showed that bonds do indeed beat out stocks for decade-long periods occasionally. And I discovered that some years, cash is king.

At the same time a truth also emerged: Staying away from the stock market, even if you are in your retirement years, is just as unwise as having all of your money in that same market. It’s like the Goldilocks story: There’s too much, too little, and just right.

But before we try to figure out the “just right” looks like, next week we’re going to look at a reason why this is important: You might live for a while.

This article was scheduled to be published in the Wichita Falls Times Record News on May 24, 2017.