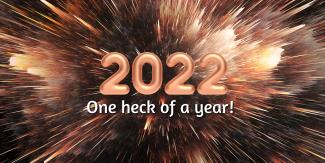 It’s Been a Heck of a Year

So far 2022 has been a heck of a year. And really, the markets and inflation are merely a sideshow to what’s been going on at the Supreme Court. Take me out to lunch if you want to know my opinions about that, for this column, we’ll stick to economics.

You no doubt heard that the S&P 500 stock index began this year with its worst start since 1970. While it gets headlines, this is not as shocking as some would think. It’s just that the index hit its all-time high on January 3 and the bear market coincidentally began as we were hanging up our new calendars. The S&P 500 has had many worse 6-month periods in the interim. And as we covered in previous columns, bear markets are not exactly new. Yet, I’ll admit that seeing your stocks drop over 20% is not pleasant to most.

Linked to this we’ve been dealing with high inflation coming out of COVID, which also is not pleasant to most. I’m with you there, but if you owned energy stocks or real estate, there have been smiles to go along with the general pain.

As I alluded to before, the place to have made money in stocks this year is the energy sector, up about 30% while every other sector is in the red. Generally, if a sector was soaring during the pandemic (I’m looking at you, Technology) it’s plummeting now. How long will this trend last? I have no idea. Maybe it’s time to bottom feed a bit and take profits if you have any, but my feel is that we’ve got further to go (Warning: Don’t make investment decisions on feelings).

And if you think that stocks like Meta (Facebook) and Tesla are a basket case, feast your eyes on cryptocurrencies. Last I looked, Bitcoin was down over 70% from its high. This is only surprising when you look back at all the blogs and YouTube videos that said crypto would protect you from a market crash and would be a great hedge against inflation. Hey, things could change, but the early polling numbers don’t look good.

Not helping is that a run to the safety of bonds is not working out too well either. Yes, they’ve done better than stocks, but they did so by “only” being down 11% this year. That’s a bigger story than the stock market (though not as sexy so it gets fewer headlines) as the main bond index has had only 4 losing years since the mid-70s.

Thoughts on all of this next week.