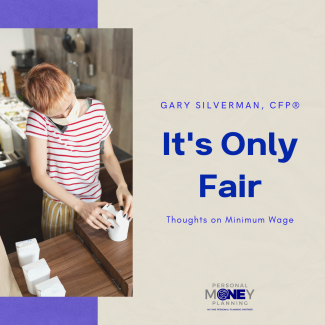 As society changes (I’ll let future historians decide what changes should be described as evolution or devolution), the idea of what is fair changes with it. Over the next few weeks, I’ll be looking at a few proposed changes. Today I want to look at the idea of fairness and the minimum wage.

The federal minimum wage and in Texas is $7.25 an hour. There is an effort in Washington to raise the minimum wage to $15 an hour. If my math is correct, this is more than double. (Yup, I just checked it with a calculator.)

Now, whenever you ask, “Is this fair?” regardless of what is being talked about, you’ll get a whole lotta different answers. But really, the answers boil down to four: 1) Yes, 2) No, 3) It depends, or 4) I don’t know. So, when you hear someone state, “It’s only fair,” whether you think them as a pompous twit or a learned orator of justice depends on whether you agree with them or not.

What is fairer: a minimum wage of $7.25 or $15 an hour? I’m one of those “It depends” people. Take for instance, Wichita County, Texas, where I am sitting now. According to livingwage.mit.edu (an excellent site, go check it out), a living wage for a single adult with no kids is $10.15 an hour. If you have a married couple who both work and have no kids, then $8.78 would be a living wage. What used to be called a traditional family, where one parent stays home with the kids, means that if they have two kids then that single wage earner better be bringing in almost $24/hour. For them $15 doesn’t come close to cutting it.

And then there’s the notion that a kid that just graduated from high school who is living with their parents doesn’t need a full living wage. There the current $7.25 would likely work just fine.

I’m thinking my “it depends” is looking pretty solid here.

And that’s the problem. We can sit here all day and build scenarios that make $7.25 look right, or $15, or $25. (We haven’t even talked about whether the living wage estimates are accurate…which causes another fairness debate…) Will one number be “fair” everywhere for everyone? If you answer either “Yes” or “No,” then the next word out of your mouth probably should be “But...” That’s because to ignore the fact that the minimum wage makes sense in so few situations is just cruel.  And to ignore the fact that doubling it across the board will solve all of the wage disparity issues across the country (as well as creating new economic disruptions) is stupid.

And you, my readers, are neither cruel nor stupid, of course.

I’m out of space this week, but next week we’ll set aside the fairness question (since there is no one answer) and delve into the pros and the cons of $15/hour.