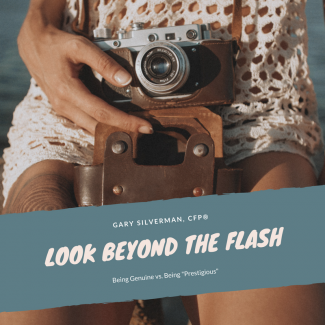 Look Beyond the Flash

A few months back I was attending a conference for investment advisors (one of the many labels I carry). There was the requisite exhibit hall where vendors to advisors hawk their wares. As they tend to pay a lot of money to be there, a lot of the meals are buffets where we pick up our food and wander around the hall. Given my love of eating, I was doing a lot of wandering.

Two of the vendor booths point out one of the many problems in my industry. The first was a company (one of many) who will help an advisor write a book. As an author myself, I think this could be a great service. Most of us are passable writers (not necessarily talented), and the publishing side is a foreign world.

This wouldn’t even be so bad, except that the purpose of the book isn’t to educate their clients and prospects. It’s to gain prestige. And as you don’t gain much prestige by recommending or even gifting a book but rather by writing one, these vendors show you how to word things to give people the impression that you are the author.

At another meal, I visited a booth that purported to generate high net worth clients. Their secret? Again, it was prestige. I think their sign said, “Gain Instant Prestige with High Net-Worth Prospects!” or something to that effect. How were they to do that? By producing a video of me ringing the opening bell at NASDAQ (one of the big stock exchanges). Not only that, but I’d be featured on that big video thingy in Times Square. I’m not exactly sure how they arrange that (I was mostly munching on some Thai chicken, so didn’t get all the details).

The vendor explained that prestige would come from people seeing the video I’d send of me opening the exchange and appearing on the big video thingy. Between bites, I mentioned something about the people I know being more concerned with the genuine than the prestigious. He looked at me like someone might look at a person who stated that the world was flat and then walked away.

From various definitions I found online it seems that prestige is based on the perception of what something is or does. Whether or not what’s perceived is actually true, honest, or genuine is irrelevant.

Whether it’s choosing an advisor, a car, or a politician, try to look past perception to the genuine. The prestigious might impress, but the genuine tends to deliver.