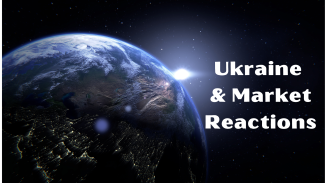 Market Reactions to the Tragedy in Ukraine

This column is written about a week before publication. Having to write these things in advance is why there was no mention of Ukraine last week. Much of today’s article comes from an email I broadcasted to my clients the day of the invasion by Russia, modified by a few more days of knowledge. Still, with how swiftly the world changes in wartime, it is likely woefully out-of-date. With that said, let’s talk.

A Tragedy – First let’s deal with what is important. There are millions of people in fear as their country is under attack. Two large armies are clashing and, barring a quick capitulation by Ukraine, thousands will die. The Ukrainian economy, already a basket case, will be in ruins. Russia has already announced that they will bring Ukrainian “criminals” to justice—and most readers can imagine what that means. Refugees from the war stream across the borders of neighboring countries. There is no best-case scenario. That is already gone.

Market Reactions – The markets have and will react.  When I looked at my computer screen on the day of the invasion, it told me that the stock market was down 2-3%. Then it ended up closing higher. Then it went up again the next day. Then it went down the day after. Uncertainty brings market volatility. All this is on top of the losses we’d seen over the last few months. That made sense: Worry about a possible war became a surety and with it, likely economic upheaval.

Surprise – As I watched the news cascade in, the markets turned higher, and the next day still higher. Why? Because the world decided to impose “severe” sanctions, but not the kind that would bring the Russian economy to a halt. That could have been done, but it would have been painful for Europe and to a lesser extent the United States. The markets decided that the war wasn’t going to be all that bad after all.

Cowards (no more) – I was going to write here about countries constraining themselves in offering military support and limited economic sanctions. Over the last weekend that changed. Countries seem to be falling over themselves trucking military supplies to the Ukrainians and thinking up new and creative ways of hurting Russia. Hurrah for them putting morals ahead of their pocketbooks.

Future Market Reactions – Unfolding events could easily cause them to tumble, and a worldwide recession is still a possibility. (That’s not a prediction.) As market responses in previous geopolitical events are so mixed, they offer little in the way of short-term guidance. The best prediction I can make is that the people who will suffer true loss if a Ukraine-triggered downturn reignites are the investors who sell out of their portfolios, lock in their losses, and miss the eventual recovery. Looking

Pray – For the people who are suffering the impact of military aggression. I hope that world leaders will successfully navigate this crisis for the tragedy isn’t what might happen to the markets, but what’s happening to the people.