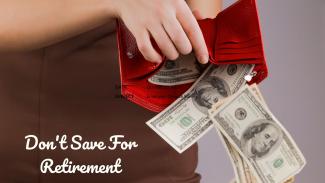 Nevermind, Don't Save For Retirement

I’m sure you are all avid readers of the Journal of Retirement. But in case anyone missed the article earlier this year by Scott, Shoven, Slavov, and Watson, I’ll fill you in here. The article is titled: The Life-Cycle Model Implies that Most Young People Should Not Save for Retirement.

The gist of the article is that the life-cycle model implies most young people should not save for retirement. This begs the question: What is the life-cycle model? It is an economic theory which suggests a rational person would want to even out their standard of living across their life. I think most of us would agree living like a pauper when you are young in order to pamper yourself when you are old doesn’t make much sense. Likewise, living in extravagance early on only to be homeless and hungry in your old age doesn’t make much sense either.

The authors note, realistically, younger workers are earning a fraction of what they will likely make later in life. Rather than taking a portion of those meager earnings to save for their future, they can even out their standard of living and enjoy a better lifestyle now. Later, when they have more disposable income, they can start saving for retirement.

The recent trend by employers (egged on by the government and other researchers writing papers in other journals) is to automatically enroll young folks in the 401(k) plan or other automatic retirement savings when they start their job. Even with the “free money” of an employer match, the authors’ research shows that saving early for retirement is not optimal.

The article is much more detailed and nuanced, but the theme is sound, and I see no problem with the methods or logic. From an academic standpoint, they are right. However, what works in research does not necessarily work in the real world.

When you dig into the report, you’ll see that they assumed the saver would use low-risk investments rather than the kind of balanced portfolio I recommend—and that can make a huge difference in the outcome. Ah, the wonder of compounding.

But more importantly, the reality I see is that not a single client starting their retirement says to me, “I wish I had spent more when I was young and didn’t have as much saved up for retirement.” Saving is a habit which must be developed. Waiting until later in life to get into the habit, after you’re used to spending on your lifestyle, can make it tougher psychologically, even if it is easier fiscally.

Still, it is nice to know that if you’re a younger person who cannot quite save that magical 10%-15% everyone seems to talk about, you can stop feeling guilty. For a while.