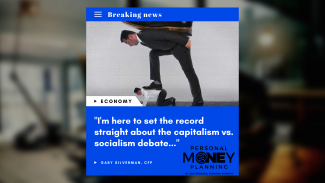 Socialism and Capitalism are on either side of a debate over what system is better for us humans. I’m here to set the record straight: They both stink.

Let’s take costs. Foes of capitalism will tell you that the profit incentive that drives it causes companies to care only about profits. Personally, I don’t buy that, but trust me, while they may not care only about profits, it is a rather major concern. The socialist will say that if we took out the profit incentive, costs of goods and services would drop.

Foes of socialism will tell you that it is that very profit motive that forces companies to be competitive. Absent a monopoly, competing firms will cut costs to attract buyers to, well, earn more profits. Without that competitive nature, costs would be an afterthought which is why goods and services from a socialistic structure end up costing more.

What about the availability of goods and services? Supporters of capitalism will say that if the market demands it, companies will provide it. It all perfectly balances out.

Socialists will tell you that is true—at least for the products and services that maximize profits. But if you have a need that affects just a few people, then companies will ignore it as profits won’t be had. Socialism is the answer as they will provide for all the people since they don’t care about the profits.

Capitalists will strike back explaining that this so inefficient, waste will permeate the socialistic systems. So, while they will want to provide for everyone, they just won’t have the resources to do it.

Maybe motivation is the key. Capitalists love talking about how everyone is so enamored with money that their system ekes out the most from each worker as those workers try to improve their standing in society.

Socialists are aghast at that notion. No, being driven by your pocketbook might work, but it then creates a system of have and have nots that gets reinforced generation by generation. They’ll go on to say that if you have a society that truly provides for all its citizens’ needs, they will be unfettered by worry and can indeed achieve their true potential.

“Nay,” says the capitalist. For the socialists’ system does not reward risk-taking without which some of the greatest achievements never would have happened. Give a person their due for the effort and chutzpah they show—let them share in the rewards of the achievement.

“No,” the capitalist says, “It is their work, let them profit.”

So, are we left with a choice of glory for a few or mediocrity for the masses?

In the end, people can look at both systems with awe or disdain (or both). Corporate masters or governmental ones…which do you trust to have your interests as their motivation? That’s the rub. Who controls? And that is the true reason why we really don’t like either system. We want to be able to control ourselves.