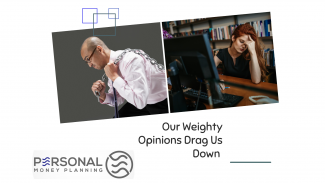 Our Weighty Opinions are Dragging us Down

Last week I left you hanging on a cliff, in a way (well, as much as a discussion on taxation can result in a cliffhanger). As I got down to writing this week’s follow-up, I kept getting drawn down a different, though related, rabbit hole. I’m going to follow that. Call it columnist prerogative.

Throughout these last few columns about taxation, I’ve repeatedly mentioned fairness is an opinion. That one person has more income than another is a fact. How that should be used to influence tax law is opinion. Once that law is passed, the law itself is a fact.

There’s a saying about opinions that I won’t repeat here, so let’s just say that everyone’s got them. And generally, everyone thinks their opinion is correct. After all, if they thought their opinion was wrong, they would change their opinion.

Here I am talking about their actual opinion. Because opinions can get you in trouble, many times a person’s stated opinion is not the one they actually believe. This may be on purpose, which is why many politicians seem to change theirs prior to an upcoming election; or it may be due to momentum, where your opinion is in the process of changing, but you’re not quite there yet. Then there is the situation where you are compelled to choose a side, even though you see the fallacies of both.

Defenders of opinion do so through careful research, much thought, and open discussion. Just kidding. It does happen, but more often defenders resort to demeaning those who disagree. While labels such as racist or pedophile are held in societal contempt, sometimes a label considered defamatory on one side can be a badge of honor for the other (activist, liberal, conservative, fundamentalist).

As extremes are reached, opinions turn from being a different side of an argument, to being wrong, to the person holding that opinion being held in disdain, to being seen as evil, to having all that they do and say being held as evil, and finally needing to be destroyed.

In the process discussion ceases, consideration is seen as compromise and compromise itself becomes evil. Sound familiar? Debate this if you will, but it seems to me that these extremes are becoming normal. When extremes become the norm, those willing to consider different sides of an argument start to be seen as extremists themselves.

In a world of sides, those in the middle—those who have an opinion but can see reason in the opinion of others and who see compromise as a solution when agreement can’t be reached—are held in contempt from both sides.

You’ve heard the phrase, “Agree to Disagree.” Take time to research the phrase, and you’ll find that it was spoken by one theologian at the funeral of another. The two had had many spirited disagreements with each other over the years, but the theologian didn’t consider the man being laid to rest a lifelong enemy. Instead, he thought of this so-called adversary as a friend. If two people can remain civil even after disagreeing on the very nature of humanity and divinity, we can certainly find some way to discuss fair taxation policies without it seeming like a war.