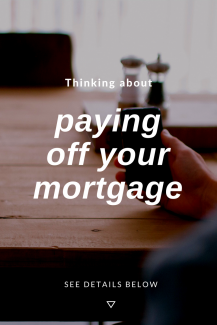 Paying off your mortgage

I’m taking a little break from the investment series based on my book to talk about mortgages. Many folks wonder whether it’s better to have your mortgage paid off prior to retiring or to use that money to build more investments toward retirement. It’s a subject we’ve talked about before, but it’s been a while, and I’m being asked about this a lot lately.

First, there is no one right answer to this. When I’m asked this question in my practice I answer it by first asking my client, “Do you want to have the mortgage paid off?” If the answer is, “not really” then we can examine the issue. Instead if they answer, “Yes” then my immediate response is to pay off the mortgage.

Now, I think I’m pretty good at this investing business. I have little doubt that across 30 years investing what would have been used to pay off the mortgage will result in more money earned than the mortgage interest takes away. My answer is not the result of spreadsheet analysis--rather it is due to human analysis. And for some reason, we humans don’t really like having a big debt hanging over our heads when the paychecks stop rolling in.

I’ll be turning 60 this year. And while, Lord willing, I’ve got another decade of work-life ahead of me, I’m thinking of this same question as it pertains to myself. My house will be paid off in about three years and I plan on upgrading and downsizing into what will likely be my last house. Having a mortgage that lasts into my 90s just doesn’t seem appealing to the right side of my brain. Meanwhile the more logical left side looks at all the money that could be freed up and invested, creating more growth now and more income in the future.

I still don’t know which side of my brain is going to win this one.

But now let’s look at it from the right brain’s point of view. What if my wife and I decided to move into Rolling Meadows after 10 years in the house? How much, if any, has the house appreciated? How long will it take to sell it? But more important is how the $200,000 of investments did. As we’ve seen in earlier columns, while 7% may be a modest average gain across 30 years there are many 10-year periods where you’d have earned a lot less.

Listen to both sides of your mind and then make the decision that is right for you.

This article was published in the Wichita Falls Times Record  News on April 9, 2017.