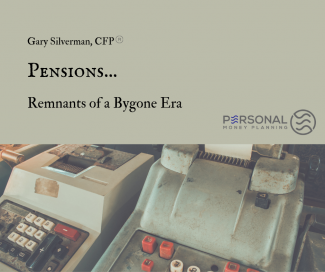 Pensions: Remnants of a Bygone Era

Last week, we started a series of articles looking at retirement planning in America. Today, we’ll begin to talk specifics. For example, there are several plans out there where the company contributes to their employees’ retirement. Today we’ll look at pensions.

Pensions were a marvelous invention. In exchange for an employee staying with a company, the company in turn would pay them a monthly retirement benefit for the rest of their lives. What could be the problem with that? Well, the biggest one is that for most people, they don’t exist.

In the private sector, pensions have mostly been eliminated or are in the process of being phased out. There are several reasons for this. One is that companies are inherently evil and hate their employees. Okay, that could not be true across the board, but it is a theme you’ll hear from a lot of media, academics, and government officials.

What is true is that some companies, while not evil, like to make profits. Employees and their benefits are an expense. Almost all the not-so-nice companies, if they ever had them, got rid of their pensions. Thing is, most of the “good” companies got rid of theirs, too. Let’s look at those for the real reason.

A pension is a promise to pay in the future. It is a promise to pay no matter how long the former employee lives (and in many cases, how long their spouse lives as well). That is a huge obligation. What if their investments don’t do as well as they expected? What if people start living longer? What if the company’s future isn’t as good as its present? These become problematic when a company is grasping for more and continued profits.

The globalization of industry also became problematic for pensions. Our companies were no longer competing among themselves, they were competing more and more with foreign firms, many of which didn’t grow up in a culture of pensions.  This global competition, therefore, meant we were competing against a business model that didn’t have the burden of a pension plans eating into profits.

At the same time, unions and the power of a unified worker voice were fading away.  And an alternative, the 401(k) became available. US companies no longer had the pressure to provide pensions as an option.

Of course, small businesses with their much smaller individual economies rarely have the means to start a pension plan in the first place.

You may not agree with my reasons for the reductions of pensions in the workplace, but the fact remains that a company having an active pension plan for its employees is now a rare thing. In its place, the larger firms have established 401(k) and other plans. But these have two main differences from the pension: They put the onus on the employee to do the investing. Most, if not all, of the contributions to the plan come from the employee, not the employer, and there is no guarantee as to what the account will be worth at retirement.

Next week we’ll go further into this, looking at pension plans for government employees and starting to look at the problems that remain with pensions and their replacements.