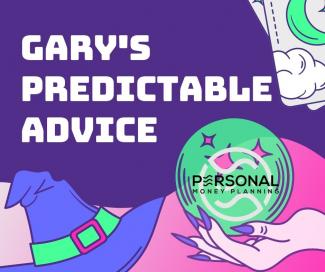 Many folks who come to me for advice are amateur fortune tellers. Because of that, they sometimes call to give me a little nudge: “Shouldn’t we [do something] in case [some event] happens?” They are either sure that it will happen, or it might happen, and if it does, it would create a calamity for their investments.

Here’s a rundown of recent years’ predictions (in case you need some lottery numbers).  They’ve included China selling off all our bonds, China going to war with us, Obama getting elected, Trump getting elected, Clinton getting elected, and Biden getting elected (I think I see a pattern there). I’ve also been warned about 20% inflation just around the corner, the dollar being replaced by bitcoin, bitcoin going up 10x, gold doubling, the S&P doubling, and the S&P crashing 80%. You may also be familiar with many of these predictions: the government confiscating (in no particular order): savings accounts over a certain value, 401(k) accounts, our guns, our gasoline-powered cars, or all income over a certain amount.

Now, I’m no fortune teller, but I have the same concerns. I might wake up at night saying to myself: “I wonder if I should [do something] because [some event] might happen.”

Now you’re probably predicting that I’ll say that you should ignore the headlines (or Facebook posts), not change anything, stay the course and just keep doing what you’ve been doing (or at least what I’ve recommended over the years).

Nope. Soothsayer or not, your concerns are valid. While I don’t want you or my clients to worry about all of these things, if there is a concern, let’s be honest about it and determine if anything needs to change. What we don’t want to do is immediately react without thought.

It’s not easy. As humans, our survival instinct kicks in when we sense fear. This is great in that rare occurrence of an actual monster under your bed, but it’s not great when it’s your investments.

With investing, you won’t get eaten by the monster. Yes, [some non-monster event] might mess up your portfolio if you ignore the possibility and it does happen; but it is also likely that the reaction to [some event] happening could be just as bad (or worse) if it doesn’t.

This is why when I wake up at night saying to myself, “I wonder if I should [do something] because [some event] might happen,” I go back to sleep. Then, when I wake put that concern on my list of things to look at when I get a chance.

That doesn’t mean I ignore the question. I just don’t go into panic mode about it. This is why I often tell my clients (or anyone who will listen) that if they can’t think of at least a dozen things that could cause their portfolio to drop, they just aren’t trying hard enough.

So, starting next week, we’ll look at some of the things that might be worrying you, and what you might do about them. Readers of last week’s column should know that a Zombie Apocalypse will not be covered.