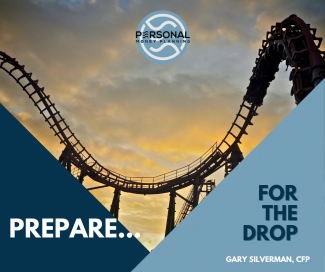 Prepare for the Drop

Last week, we started to talk about the problem of investing into a bull market. While most people don’t see a problem with a bull market (after all, you make a lot of money), for someone who studies the markets it can be a scary time.

We all know that markets go in cycles. Bulls, Bears, Stagnation, Bubbles, Crashes—a straight line it is not. And if you have been experiencing a bull market in both stocks and bonds for a long time (as we have) you’ve got to figure the next down cycle is getting closer. How much closer is rather difficult to tell (at least I haven’t figured out how), but to ignore that it’s out there would be rather stupid. And my readers aren’t stupid.

If you don’t need any money from your portfolio, the ups and downs, while certainly interesting, don’t really matter too much. But if you are going to need to spend some of your investments, I think you’d prefer to take the money out when the market is high rather than when it is low. While I’ll be talking more to those nearing or in the early stages of retirement, the principles remain true regardless of your age or the reason you want to get at some of your money.

You’ll want to guard against the rather negative effects of the market dropping, crashing, or generally not cooperating when you’ve got bills to pay. We’ve talked about most of these before, but it’s always good to have a reminder.

There are several ways to keep an untimely bear market from messing up your plans. The first you’ve heard about from me quite a lot in the framework of a Safe Withdrawal Rate. The principle is simple: Figure out the maximum you can be drawing from your portfolio where even if the Great Depression (or other equally lousy economic times) occurs, you won’t run out of money.

What is that rate? Well, it depends on how long you will be drawing the money out, your tax situation, and the kind of investments you use, but various studies put it somewhere between 3-5.5 percent. Let’s say that 4% is the magical number for you. If you’ve got $1million in your portfolio, you could draw out $40,000 per year without much worry.

Easy. But what if $40,000 per year isn’t enough money?  Or what if you don’t happen to have $1million in investments? Or both? Then you’ll need to adjust something. The obvious one is to tighten the belt and spend less. No need to go into too many details there. Not too much fun, I’ll admit. Plus, you may have already cut and scrimped as much as you can.

Another way around this is to die sooner so you don’t need to live as long on your investments. Sounds like even less fun. Isn’t there another way? Sure.

What you'll need to do is be flexible. Market lousy? Then cut back your discretionary spending. Think delaying or downsizing the new car, skipping your vacation, and the like until the markets recover. That means you might have a boring year or three, but isn't that better than your money running out before you do?