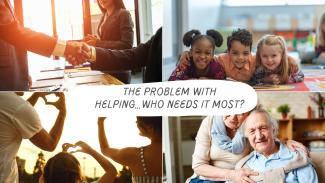 The Problem With Helping

As I’m writing this, the stock markets have been falling dramatically. I’m ignoring that for now. Yes, I know that many of you want to know my take, but generally it’s the same as it’s always been, and I get tired of writing the same thing (albeit in clever and exciting ways) every time the market falls off a cliff. Don’t worry, I’ll get back there again in a bit, but first, a topic that no one has ever written about: COVID.

I was reading the other day that a horrible thing happened. In trying to quickly get money out to people affected by COVID, billions were sent to entities that shouldn’t have gotten it. Or once the intended person, business, or governmental agency got the money, it was spent on questionable projects. Of course, what the author of that article thought was proper and what you or I might think was proper are likely not the same.

Still, there definitely was waste and fraud involving billions of dollars. While that might sound like a lot, realize that the government was falling over itself trying to get hundreds of billions out into the economy. While no one will know the final number, my guess is the abuse was a small percentage and comparable to the abuse every other time congress has tried to do something quickly.

And I’m fine with that.

No, I’m not pro-waste and abuse. Those that defrauded us (we taxpayers paid for it, after all) should face the wrath of the government. But there is a certain reality at play here. If you build up a bureaucracy that prevents anyone who shouldn’t get money from getting it, you will also prevent a lot of folks who truly need the cash from getting it. And no one will get it quickly. If you streamline the bureaucracy to make sure cash gets to those folks when they might actually need it, you’ll also end up giving it to a lot of people and entities that absolutely do not need it.

If you have an example where neither happens, I’d love to hear about it. My guess is that I won’t have to check my mailbox for your reply.

Help those who don’t need it or don’t help those who need it; err on the side of miserly frugality or ill-placed generosity—which way would you choose? We want neither, but we get both.