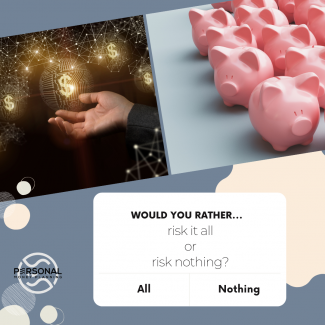 Rebalancing: The Cure for “All or Nothing”

Here’s a tale of an investor who was on the internet trying to find out what was going to happen with the stock market. He found a website where an investing “genius,” who had predicted market collapses in the past, was predicting an 80% crash was going to happen in the next couple months. I get a call: “Sell everything.”

His worries were well-founded. During the five years prior to that phone call, the stock market had been steadily making newer highs. Eventually that would stop and there would be some kind of correction…possibly a serious one.

Keeping yourself from losing close to half your money is a pretty good strategy—If it works. But it didn’t.

Instead, in the five years since the phone call, he missed out on about a 65% gain in his portfolio. That’s the cost of acting on a single prediction that didn’t happen.

But what if the 80% drop did happen? Absent his “sell everything” order his portfolio would have dropped 48%, as he had a balanced portfolio that contained more than just stocks. Assuming the market recovered with the same growth we’ve seen over the last five years; he’d still be sitting on a loss of around 40% had he done nothing. Which, of course, is what his “sell everything” order was trying to avoid.

Let’s keep that initial loss but have him follow the advice you read about quite often in these columns: Rebalancing. In order to help you see this clearly, imagine the portfolio started at $100,000 with 40% in something safe and the other 60% in stocks. That’s $40,000 in safe stuff and $60,000 in the soon-to-be-sinking stock market.

After the 80% crash in stocks he would still have $40,000 in the safe stuff and only $12,000 in the stock market. But remember, his portfolio was designed to hold 60% stocks. So instead of doing nothing, he goes ahead and rebalances his portfolio that’s now worth only $52,000. After the rebalance he’s got $20,800 in safe stuff and $31,200 in stocks. Assuming the same ensuing five years of stock market gains, his loss five years later would “only” have been around 28%. While not stellar, a 28% loss is better than a 40% one.

Some lessons here: 1) If you predict a market catastrophe and it doesn’t occur, you are giving up some serious money by missing on the gains. Putting all your investments in one basket is bad, but so is assuming a single market scenario is possible. 2) Market catastrophes do hurt and that hurt can last many years before you get back to where you were. Making plans as if they never happen can be just as bad as assuming they’re just around the corner. 3) Rebalancing does help control risk.

Next week I’ll have a cautionary addendum to today’s story.