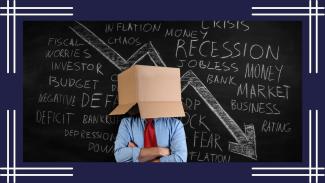 Is a Recession Coming?

As I begin writing this series, which will last an unknown number of weeks, I am reading a headline telling me the stock market has dropped so low that we are back to where we were in 2020. The National Bureau of Economic Research (NBER) has not yet declared we are in a recession. Inflation is high, unemployment is low, and most people know something is wrong, just not what it might be.

That things will have changed between now and when you are reading this is of no doubt. However, exactly where we are in the investment cycle (dropping, bottoming, or recovering) should not make too much difference in what I am going to say. If it is a little dated, just tuck what I say in a safe place. It will be useful in the future. This is a cycle, after all.

Today let’s talk about the R-word: Recession. As mentioned above, we are not in one yet. Surprised? Many are. First, you all know something is wrong. You have seen the dreaded two quarters of negative GDP. You thought that meant we were in a recession.

Head-fake. It is the NBER, mentioned above, who declare if we are in a recession. Why them? No good reason. But since there are a lot of economists, and one of them is always using the R-word, we need to have someplace for guidance. The NBER has been doing it a long time. Call it tradition.

Well, it seems most economists I have read or listened to seem to agree we are not yet in a recession. That is the good news. The bad news is most of them seem to agree we will be in one before long. Maybe next year.

Oh My! The stock market is going to keep going down all next year?! Well, ya never know, but the stock market tends to be what we call a leading indicator. That means it gets ugly before things truly become bad. Alternatively, the market improves before things truly become better. It is anticipatory. Sometimes it anticipates correctly, sometimes not.

That is what you are seeing now. In anticipation of businesses doing bad, people being laid off, and a recession traveling around the world, it is responding to those potentials in the form of a bear market.

Recessions, like bear markets, are not at all uncommon, as I have mentioned in previous columns. In the last 70 years, we have had eleven of them, lasting from 2 to 18 months (the average is about 10 months). When they are over, we typically have a strong economic cycle lasting 5-6 times longer than the recession before it.

That does not make it pleasant though.

Next week: Markets in a Recession.