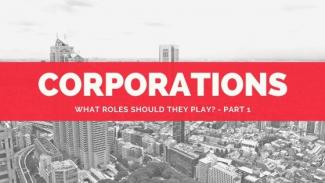 The Role of a Corporation, Part 1

Back when I taught financial management, the basic tenant was that the primary role of management was to maximize shareholder value. The idea was simple. Owners of a company (the shareholders) want their employees (management) to make them money.

That tenant is now seen as simplistic and naïve today. Over 180 chief executives of many of America’s premier companies say that is no longer their job. Yes, the owners of the company do deserve to make some money, but the interests of the company’s employees are as important, if not more. Oh, so are the customers. And the environment. And, of course, let’s not forget society as a whole needing to be served. Yes, shareholders may own the company, but they no longer have preeminence to that company’s efforts or loyalty (let alone profits).

There are two immediate thoughts that come to mind from this apparent shift. Those not fortunate enough to own a company will often tell you that a company's primary responsibility is to society first and then to their employees and customers. If there are any profits left to distribute after that, then owners can have the residuals.

The other side of the discussion comes from the owners of companies (like me). In the past, I had an employee tell me that because I made “enough” money and they did not, that I should reduce my paycheck in order to increase theirs. I was not keen on that idea. Years prior, I had left a job, emptied out my savings and my retirement, borrowed more money and poured it all (including my sweat and tears) into my new firm. I had invested a huge investment back then, and now wanted a huge return. Yup, I’m selfish that way.

Now, for the most part, those at the top of the major corporations of the world didn’t risk all their money and flirt with potential bankruptcy to start a business. They worked their way up the corporate ladder with a steady paycheck. Quality work brought bonuses. The big leagues brought stock options. And now their compensation is likely measured in seven digits or more. For the most part, they are not the owners or founders of the firm. Nevertheless, they are still not keen on the idea of lowering their wages for others, either.

What’s your take, as an “owner” of a company? If you are lucky enough to have a pension plan, it is likely that one of the foundations of that plan is the ownership of stocks of companies. If you have a 401(k) or 403(b) plan at work, it is likely that much of the growth you’ve seen over the years has been due to your ownership through mutual funds of stocks of companies. It’s the same with your IRAs and other investment accounts.

While I think that the pronouncement of the CEOs was more a publicity grab and a way to fend off rising criticism of capitalism (yup, I’m that cynical), we are still left with the question of who deserves the profits of a business—and, perhaps more importantly, who gets to decide that answer.

We’ll look at this next week.