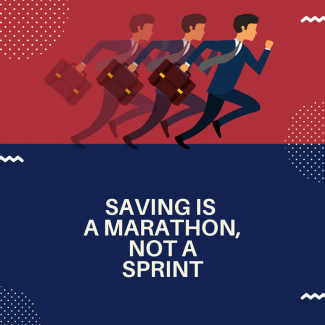 Saving is a marathon, not a sprint

For years, “running a marathon” was on my bucket list.  Last year, I learned about this program called C25K (Couch to 5K) at a Chamber event at the Endurance House. It is a training program to take so-called couch potatoes and turn them into 5-kilometer race runners in 2 months. I figured that this 5K thing could be more a reality than that marathon idea.

Now, other than going to and from the bathroom during a movie, I had not run since boot camp about 41 years ago. While I had my doubts about the C25K program, two things gave me confidence. First, others had done this before me and had apparently not died in the process. Second, I could always drop out. Neither was true back in boot camp.

The first run sounded too easy: a 5-minute walk followed by one-minute jogs in between more walking. Must be for the out-of-shape folks, I thought.

Imagine my surprise when I found myself covered with sweat on a January afternoon (it was close to freezing).  My lungs felt like they were on fire, my legs were a wobbly mess—frankly all I was wondering was when that last darn 60-second jog was going to end.

Nevertheless, in two months I went from feeling close to death after running a minute to being able to run the 3.1-mile race. I was able to run the entire time, actually passed people while going uphill, and took 2nd in my age-group (albeit there were only four people in my age group).

Okay, nice story, but what does this have to do with money?

Saving money can be the same for a lot of people. We try, but then something comes up and we quit. We try again, and really don’t know why we stopped, but we did. Eventually we stop trying.

You are allowed to try again, with running or savings. Here are some tips:

We didn’t all do the same. Each of us came with different abilities. But all who finished the training came away better than they went into it. You can, too.