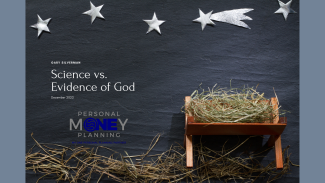 “Science has eliminated the possibility of God.”

Gary, having entered his 65th year of life, has had many disjointed subjects on his mind in the many decades he’s been writing about money. This is one of those thoughts.  This being Christmas weekend, I thought I’d get religiously philosophical (assuming that’s a thing).

The first line of this article was a statement made by a friend of mine as we were driving around one day. He was not trying to debate. He’s agnostic and really wants there to at least be a possibility—he just didn’t see that science left any room for it.

Now, it won’t take too much time watching science shows on TV or doing a Google search to find out that there are a lot of scientists who have said that there are no gods. Others will tell you that our understanding of the universe requires no belief in a god. They may concede that, at most, God turned on the universe’s switch and then sat back to watch.

This is not to say that scientists can’t believe in God. Many do. I’ll admit that a lot are in the camp mentioned above, believing in a “set it and forget it” god. Others believe in a spiritual force that actively works on the soul but stays away from the physical universe. Praying to that kind of god won’t do you much good until you leave the physical universe.

A small set believes in a God that is personally interested in everything that has ever happened and is actively involved in all day-to-day activities. You know, the kind that might have sent His Son down and whose birthday we might celebrate. That they are sometimes ridiculed by their peers is an understatement.

After all, most of the accepted theories of the universe have left no room for any action of God in the present and have no need for a god to flip the on the switch at the beginning of things. Because of this, I think that God just doesn’t enter the minds of many scientists to think one way or another about it. If you say that an active God exists, a scientist will naturally tend to want some sort of proof for the hypothesis.

What a lot of believers outside scientific circles seem to do when faced with the god question is ignore science. Some outright rebuke it as if it is the devil. But this is a bit counterproductive. Why turn our backs on science when it has offered us so many extremely useful advances, even while working through a myriad of scientific hypotheses and theories?

Add to this that most scientists don’t attack beliefs in God—they just don’t think about it. Why should they? As I mentioned before, their theories seem quite plausible without the need for one. And if we don’t need something, why should we take the time to prove or disprove its existence? Scientists are not alone in this. A rather large portion of all humanity has, at best, only a sprinkling of belief in God.

But just because so many don’t know about a need, or can go day-to-day ignoring it, doesn’t mean it’s not there. As for me, I had a need for a savior. I found  Him (more properly, He found me). I celebrated His birthday yesterday.