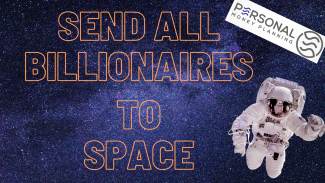 Send All the Billionaires to Space

There seem to be a lot of people upset with certain billionaires launching themselves and their friends into space. I’m here to tell you that the complainers just shouldn’t as the billionaires are doing what they want them to do.

You see, the big problem that folks have with billionaires is that they have, well, $billions. It just doesn’t seem fair that they get to have all that money while [fill in the blank with your favorite underfunded cause] doesn’t.

Yet in launching themselves into space, you get one of two things. First, you get the wealth redistributed. Launching yourself into space is proving to be a rather expensive endeavor. Think of all the smaller businesses that made the metals, the electronics, the fiber, the fasteners, the paint, and all the other stuff that makes a spaceship. Lots of non-billionaires got employed. This is trickle-down economics at its best. And unless somehow the billionaires end up making money off the deal—and that will take a long time, if ever—they will end up with fewer billions and that money flows out to the people. What’s not to love about that.

The other thing that could happen is that they end up jump-starting a whole new industry and get ever filthier rich than they already are. But think about it. If that happens, you have new permanent jobs, new businesses not owned by billionaires, and (hopefully) an advance for humankind. If you don’t like that a couple of people become ridiculously rich in the process, just change the tax laws.

I happen to like space stuff, so to me it’s fun to see private individuals advancing the exploration and use of space. But let’s face it, from the beginning a lot of people thought this whole space thing was a waste of money. Sure, now they like their GPS, cell phones, weather forecasts and the like, but they’ll still insist that the money could have been spent on subsidized childcare, cancer research, or other noble causes.

They have a point, but there’s also the point that while no diet is improved with a scoop of ice cream, spending a little less on lima beans now and then and heading to Braums is a worthwhile decadence.

What it really tends to come down to is that each of us has both a set of priorities and a set of non-priorities that we’re willing to compromise about. Before you try to argue, tell me what you watched on TV yesterday and justify it or that trip to Disneyworld without trying to use the stress relief argument. Want stress relief? Take a walk.

So, let’s encourage our billionaires to reach for the stars (or in Elon Musk’s case we can add underground with his Hyperloop). Spend your money, blast off, have billionaire space yacht races. In the end, it’s a way to have billionaires spread their wealth and have fun in the process. And isn’t the smile on their little faces priceless?