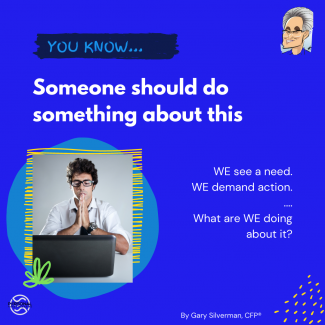 Someone Should Do Something About This

WE see a need.

WE want something done about it.

Sometimes, this means WE roll up our sleeves, open up our wallets, and get to work. But more often than not, WE pass the buck for this work. The responsibility of WE becomes something THEY should take care of.

WE see a need.

WE want THEM, particularly, the Government to do something about it.

Take the various efforts to help people stay in their homes during the pandemic. As the economy shut down, WE saw that through no fault of their own, folks were at risk of getting thrown out of their homes when their income went away. WE demanded Government do something about it. Two solutions were available.

The first solution would be for Government to give money to the out-of-work people so they could afford to pay their rents and mortgages. This might be in the form of increased unemployment, or vouchers to pay rent. An alternative would be to pay the landlord or mortgage company directly in exchange for them not kicking out their tenants.

One problem:  The Government needs money to buy the resources and pay the people to do the doing. WE says, “Wait, don’t look at me, I see the problem, I demand the solution.” Again, WE argues THEY (particularly, anyone other than WE) need to be the ones to pay for it.

The other way to make this work would be Government making it illegal to kick out non-paying tenants. Problem solved…and it wouldn’t cost the Government any money. That’s great, unless you happen to be the one who held the mortgage or owned the rental property. Don’t worry…once this is all over, you’ll get your back-owed rents and mortgage payments. After all, THEY say, you took a risk being in business and sometimes it just doesn’t work out.

Thing is, if someone couldn’t afford to pay for their housing during the crisis…how exactly are they to pay the growing mountain of debt once things get back to some semblance of normal? And about that business risk…kinda unfair to change the rules of the game and then blame those affected for the results.

This is an oversimplification of this particular problem, and this is just one of countless examples of the WE expecting THEM (including the Government) to fix things. It works because there are a lot of WE, and in most instances a very few of THEM, to complain.

One way to make WE more accountable for the costs of fixing things we think are broken is for WE to pay for it. On the surface it would seem that instead of making the landlords shoulder the burden of pandemic housing, we could stick with the first option and have our taxes pay for it, and WE, in turn, pay those taxes. That way the demands of WE are paid for.

But the situation in this country is becoming one where fewer and fewer of the WE, the people, wish to pay the taxes to pay for the demands. As this continues, WE will be the majority, thereby controlling the votes and therefore the Government. A Government led by such a majority would have a desperate hunger to meet the needs of all of US but lack the appetite to pay for them.

Lord help THEM whose wallets look so mouthwatering.