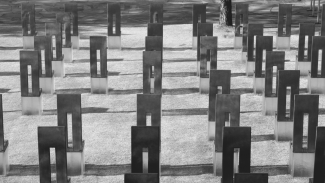 As I mentioned in last week’s article introduction, I was out running a marathon. Specifically, it was the Oklahoma City Memorial Marathon—a fundraiser for the Oklahoma City National Memorial Museum. But it’s more than that. It is the RUN to REMEMBER.

I was raised in a Jewish household and remembrance is ever-present in that culture. Many examples abound, but one that most might be familiar with is the Passover: A holiday remembering the deliverance of the Jewish people from Egyptian slavery.

In modern times it is the Holocaust that is burned into the consciousness of every Jewish child. Parents do not shield them from the realities of what happened…lest people forget. What is made clear is that every society that exists is one where such a thing can happen again.

As I approached the Oklahoma City National Memorial Museum a couple days before the marathon, I was looking forward to the visit. It would be my third time there, but this would be special as I would be taking part in an Eyewitness Tour. This is where someone who was directly touched by the tragedy would give us insights that no museum exhibit could.

Our tour group consisted of the four of us and a few park rangers. Our guide was a lady whose father had been an employee with the Social Security Administration and worked in Alfred P. Murrah Federal Building. On that fateful April morning in 1995, he was at his desk which was visible through a window at the back of the building. His office faced 5th Street, where Timothy McVeigh had pulled up in a Ryder rental truck outside.

That morning, our guide was preparing to head to the college to attend her speech class.  A few people mentioned and shared (in the less instant fashion than we know now with 24-hour news available in the palm of our hand) that there had been an explosion downtown. Inquiring from a friend, she found out it was a bomb at the Murrah Building. That didn’t register at first. Her family always talked about dad working in the Federal Building. She had no idea they were one in the same. Until later.

Her college graduation, first job, marriage, children… the opportunity for her dad to witness these life moments was gone. McVeigh took that away. Took away her kids hearing their granddad’s laughter, his kiss, heartfelt encouragement, or hugs.

Took away the futures of nineteen children who were in that building.

Took away the lives of 168 people. All that they were to be. All they would accomplish. All the love, friendship, and joy that would have been.

Unbounded hatred took that away.

After the tour, our guide confided in us about her present-day fear. She fears the hate and the anger she sees around us. It scares her.

Frankly, it scares me, too. Disgruntlement. Resentment. Protests. That’s all fine; that is freedom. But when the protest script shifts into threats, that anger transforms into hate. And that hate leads to deaths.

It’s not easy to see the mutation when you are in the midst of it, but it is there. It’s not simple to speak against the momentum of rhetoric, but we must. Because there will come a time when we can’t run away from it, anymore.