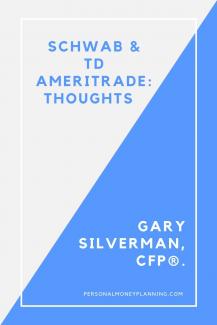 Two weeks ago, we began a discussion about the purchase of the very large discount brokerage firm, TD Ameritrade, by the even bigger firm, Charles Schwab.  I led you through my history:  when Schwab didn’t want to do business with my firm in its early days (I was too small for them), I ended up using the tiny discount brokerage firm of Jack White and Company for my clients’ accounts. Eventually, that firm became TD Ameritrade. The story continues…

Some wonder why Schwab is buying TD Ameritrade, but the real question is why TDA is willing to be purchased by Schwab. After all, TDA has been competing with them for years, quite successfully. Yes, they are smaller, but they were quite profitable.

Actually, it was inevitable. At one time, commissions (trading fees) for stocks and such were the bread-and-butter of the retail side of the industry. Those fees had been falling for years. Earlier this year, they dropped way down as Schwab began charging nothing to trade stocks. Most other large discount brokerages had to follow suit. This hurt everyone in the pocketbook, but since TDA earned a bigger piece of their revenue pie from commissions (about 15%) than folks like Fidelity, or Schwab, they were especially vulnerable.

Fidelity, of course, can make money off their funds. Schwab makes a lot of money from the cash that people have in their accounts. Not only do they own the banks that provide that cash, but they “encourage” many of their clients to maintain a certain level of cash to boot. TDA owns neither the banks nor do they have funds.

So, as they say, if you can’t beat them, join them.

In the end, Schwab swallowing up TD Ameritrade will bring both good and bad to their clients and perhaps, more importantly, the industry as a whole.

For clients of the two firms, this combination brings together two of the most technologically advanced firms in the business. In some areas, TD Ameritrade shines, in others Schwab does. So, there is the potential for improvements no matter which platform you are currently using.

The separate firms already have economy of scale. The resulting behemoth more so. This might allow them to pass some of the cost savings to their clients…though I think this is doubtful given the haircut they already took when transaction fees went away. But the soon-to-be much bigger Schwab will be able to negotiate better deals for itself. After all, one of its main competitors won’t be there to counteroffer.

And that’s the potential danger of this merger. It will be the equivalent of a Walmart coming to a small town. While the event is not a death knell for every small business, it’s definitely not pretty for them. So for the myriad of smaller firms that contract through Schwab or TD Ameritrade, I’d expect they’ll be helping pay for this one way or another.

And while both firms fall over themselves saying it isn’t so, ten years from now I think we’ll be able to look back and see that independent advisory firms (like mine) will either have to pay a pretty penny for services that were once free or be fighting Schwab as it turns its sights on our slice of the pie next.